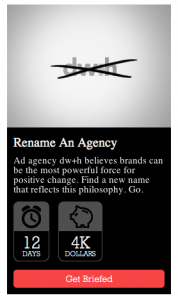 DW+H (DonatWald and Haque) is teaming up with Victors & Spoils in order to re-brand its agency.

I guess the more correct question would be “why expert sourcing?” since we’re tapping into 6000+ advertising experts within the Victors & Spoils community. While crowdsourcing is not the right approach for every task, this project lends itself to collaboration with Victors & Spoils very well.

We expected a high level of participation, since it’s not often that people get an opportunity to rename an agency. This endeavor has already broken Victors & Spoils’ record for the number of submissions in the first few days. Further, crowdsourcing taps into Malcolm Gladwell’s “Blink” concept of rapid cognition. For a member of the crowd, there is little investment with the chance to earn some extra cash and bragging rights for having developed the winning name under the shower.

Did you have any rules or requirements as you started the project?

We wanted to make sure that this is an open brief. A brief anyone in our agency can also participate in, true to the notion that an idea can come from anywhere. The only restriction is that everyone needs to submit their ideas through Victors & Spoils. This keeps the playing field even and actually provides an opportunity for everyone at DW+H to earn the $4,000 for the winning name as well.

Any fears about the process?

Going into it, we realized that this collaboration with Victors & Spoils would generate a lot of different opinions. It was clear from the beginning that opponents of crowdsourcing would not become fans of this initiative. We also realized that naysayers would come out of the bushes wondering why an agency would consider getting additional outside help.

My personal fear was that our peers would not be able to be honest with themselves. Let’s face it: agencies are the worst at branding themselves. For example, it took more than one year at two of my previous shops just to update the agency website. But this is not a branding exercising; this is a naming exercise. First, let’s admit that naming is not a core competency of most ad agencies. The name should say something more. It shouldn't serve the egos of the founders of the majority of agencies. This speaks against Branding 101.

Let’s do everything, including our name, more creatively. The excuse of being too busy with client work should also not count as a reason why so few agencies have considered a more meaningful name; a name that sparks interest and is a conversation starter, not one that is a bunch of people’s names (which later is shortened to acronyms in order to contemporize the brand).

My fear was a shared one with John Cage who said, “I can't understand why people are frightened of new ideas. I'm frightened of the old ones.”

Why is this type of collaboration important for the future success of DW+H, whatever the name may be?

Collaboration is important to everybody’s success. This is simply how the universe works and agencies are only waking up to this reality. This specific "co-opetition" between us and Victors & Spoils, is a perfect example of two companies collaborating with shared interest with the intention to create a better outcome. With our vision of brands being the driving force for positive change, collaboration is at the heart of DW+H. We prefer to look at “competitors” who share our values as “co-conspirators,” allies striving for the same broader agenda and collective benefit.

Some publications have pointed out that an agency should be able to re-brand itself; however, you’ve made it clear that DW+H is working internally on the project as well. Do you think there is value in taking a step back from being so deeply involved in your own rebranding?

The approach of partnering with Victors & Spoils has already generated great discussions internally and only elevates our own thinking.

We also have already seen some great ideas from unexpected places, like an executive of a leading media agency submitting a name with a fresh take, which gets us excited about digging through all the submissions to find more jewels.

And since there are not enough agencies in the world that are trying to make a difference, we’re also happy for more people to find out about our story and transformation. Our website traffic has grown five times daily since the brief went live on Victors & Spoils.

Why do you think many professionals shy away from agency collaboration? Do you think this hinders the industry from advancing and innovating?

Agencies are quick in claiming that they are great collaborators. But turf fights happen quickly when you put own interest (and revenues) over the outcome and the clients’ needs.

How will DW+H’s use of crowdsourcing help them to better understand its clients?

The crowdsourcing project with Victors & Spoils is currently limited to our own rebranding. We have no plans to use crowdsourcing for current client work as of now, but I could very much see us using this approach to identify latent consumer needs for any of our clients in order to invent more relevant products and services (think “My Starbucks Idea”).

Do you think there are too many agencies with +’s and acronyms?

I don’t think the pluses, minuses or brackets are the issue. The convention of naming agencies after the founder instead of saying more is the missed opportunity here. Most people at shops like BBDO don’t even know what the initials stand for (no offense to BBDO). The goal is that our new name will have as much meaning for our own people as it will have for prospects, clients, vendors and talent.

Final Question: Would you accept a crowd-sourced name that included a plus, minus, bracket or other any other punctuation mark?

Not wanting to restrict any thinking I say, “never say never.” The only trick is that in today’s world symbols make it hard to have consistent branding across owned media channels since URLs and social media handles don’t allow you to use these symbols. A challenge we realized when considering our philosophy “+change” as our agency name. 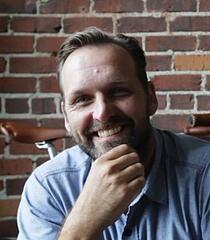 Frank Striefler first began his career on the agency side, managing global brands such as adidas and Puma before he moved over to play on the other side of the fence, taking client-side roles as the European Marketing Manger for Wrangler Jeans, Advertising Director at Nike Germany and EA Sport’s European Marketing Director.

Moving to the U.S., Frank went back to the agency world introducing Connections Planning to the Agency of the Year, Berlin Cameron, in NYC. But Lee Clow called, and Frank moved coasts, joining Apple’s global lead agency Media Arts Lab as Director of Media Arts Planning in Los Angeles. Frank was a key team member in defining and galvanizing Media Arts as TBWA network’s groundbreaking philosophy and designing the media arts planning process. He was also the publisher of the widely distributed weekly Media Arts Monday newsletter. After expanding his responsibilities to include CHIAT\DAY’s clients, he was in charge of orchestrating total brand behavior for clients like Pepsi, Visa, WaMu and Infiniti.

Always passionate about innovation and forward thinking, Frank joined DW+H as Chief Strategy Officer at the beginning of 2012. Frank shares DW+H’s vision that brands are the most powerful agents of positive change.