5 Ways to Use Cinemagraphs in Your Marketing Campaigns

To gain the attention of distracted online visitors, more brands are experimenting with cinemagraphs.

The Wall Street Street Journal recently wrote, "In an attempt to cut through the noise, marketers are increasingly experimenting with new visual tricks and gimmicks designed to make consumers stop and take notice, if only for a second or two. Cinemagraphs -- still photographs incorporating looping video elements -- are a recent example of such a tactic."

Using cinemagraphs as part of digital marketing campaigns will not only set your company apart, it will also engage your prospects and clients.

Here are five ways to incorporate this new technology into your campaigns with some stunning examples:

Social media distribution is an important part of driving traffic to your campaign, and it is a great place to experiment with new formats and ad types. You'll know fairly soon if that piece of content is resonating with your audience.

Case Study: Inspired by Alfred Hitchcock's genre-defining film Psycho, Bates Motel is a runaway hit thriller on A&E. For the series three premiere, A&E decided to do something big. Their mission: to create cinemagraphs based on the infamous Psycho images. The network posted the cinemagraphs to Facebook, Twitter, Instagram, and Tumblr, resulting in thousands of shares and comments.

Email continues to play a key role in marketing strategies. Every email marketer looks for ways to improve campaigns and drive deeper engagement through the use of design, images, and copy. One popular trend is to add in small looping animated GIFs to catch the recipient's attention. But subtlety is the key to success here, as you can see in the example below.

Case Study: House of Cards is currently Netflix's largest original series (with 39 episodes in total) and arguably, its most successful. Having won four Emmy Awards and two Golden Globes, it's clear that House of Cards is doing something right. For both season two and three of the show, Netflix used cinemagraphs in its email marketing campaigns.

Walk around the streets of Toronto, New York, the airport, or a mall, and you're bound to come across digital displays. Some will be playing videos, others show photos, and usually, people walk by without a second glance. We’re so used to being bombarded by ads that we have trained our minds to simply block it out. But cinemagraphs are still a new format, and the subtle movements in them can be surprising.

Case Study: On September 15, 2014, millions of New Yorkers witnessed  as a living photo of the starlet and her billowing white dress was projected on the sides of various landmark buildings in Times Square, Union Square, Columbus Circle, and around Grand Central Station. It was the 60th anniversary of the “white dress” scene from The Seven Year Itch. As part of a larger marketing strategy, this iconic cinemagraph brought in millions of likes on Facebook, great press, and a piece of stunning content that continues to be shared across various digital marketing platforms.

Displaying cinemagraphs on websites is simple -- a cinemagraphc embed code works just like a YouTube embed. It enables HD auto-loop and auto-play functions while making your cinemagraphs look fantastic on any device and in any browser.

Case Study: The Nature Conservancy created a website focused on educating and engaging people on the world’s most vital resource: water. The non-profit hopes that the cinemagraphs will help to drive people to explore the site. Check out the site to see the beauty of water come to life in four stunning living photos. 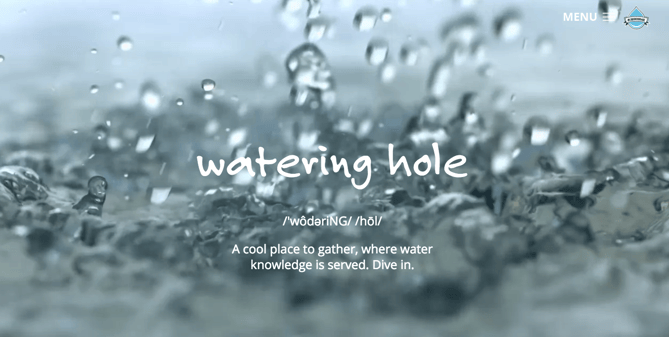 Banner ads -- those annoying little blocks that show up on the sides, at the top, on the bottom, and in the middle of our screens. Yes, we've all used them in our digital marketing strategies, but with what effectiveness? Cinemagraphs provide an alternative to static banner ads, and our results have shown that the inclusion of a cinemagraph drives on average a 5.6X higher CTR than still images.

Case Study: Being harassed with banner ads is not always fun, but every so often you stumble across a really great one and decide to delve further into the ad. We did a CTR test with two different ads: one still, one a living photo. Both are beautiful, but one was much more effective.

The great part about all of this is that you can create one (or a series) of cinemagraphs and use them across all of the above platforms as a successful and eye-catching digital marketing campaign. As cinemagraphs become more popular and we begin to see them more and more in the media, get ahead of the crowd. Now is the opportunity to experiment with the format and stand out to your target audience.