The new tagline continues the tradition of Wendy’s previous campaigns such as “It's better here,” "It’s way better than fast food ... it’s Wendy’s,” and “The best burgers in the business,” which all positioned the burger chain as the higher quality alternative to its competitors McDonald’s and Burger King.

For Wendy’s, the introduction of a new tagline is not all that unusual. While McDonald’s has continued to use “I’m loving it” since 2003, Wendy’s has tinkered with 10 different taglines during the same time frame. Some of them are memorable like the aforementioned, “It’s way better than fast food ... it’s Wendy’s," while some are, should we say, less than top-of-mind. Does anyone remember the guttural “Uh-Huh” that apparently ran from August of 2006 to March of 2008?

Anyways, this got us thinking. With fast-food restaurant taglines changing with relative frequency, what are the best, most memorable taglines of all time? Here are our favorites:

Debuting in 2006, the “America Runs on Dunkin'” tagline immediately cast the Massachusetts-based coffee chain as the no-frills alternative to Starbucks. It made clear that coffee was fuel purchased on the way to a demanding job, not something that was ordered in bastardized Italian and sipped on while toiling away “working” on a debut “novel.” It resonated well, and the tagline is still in use today.

Sure, KFC’s “Finger lickin’ good” tagline is arguably more relevant in the pop culture lexicon, but there’s something so timeless about this '70s tagline and accompanying ad campaign. Maybe it’s the catchy, Barry Manilow-penned jingle. Maybe it’s because looking at the copy, it should sound clunky, but it somehow rolls off the tongue. Or maybe it's the simplicity of it all, especially in the wake of KFC’s recent creepy imposter Colonel campaigns. Who knows ... But watch the below video, and try not to smile.

Before Taco Bell settled into its role as the official fast-food sponsor of college students, it advertised as the adventure seeker’s alternative to traditional fast food. With it came the late ‘80s to early '90s tagline “Make a run for the border” and commercials that featured tired corporate drones escaping south and finding a satisfying, exotic meal along the way. In its full ‘80s cheesy glory and accompanying jingle, this tagline is in a word -- awesome. I mean, just look:

Though the humorless like to refer to puns as the lowest form of wit, there’s no denying that a well-crafted play on words can be quite memorable. And Hardee's understood that. Using its trademark star as inspiration, Hardee's spun this simple, memorable, and to-the-point tagline. It’s just really well done.

According to a Lafayette College study, consumers are more likely to believe statements if they rhyme. Apparently Dairy Queen was aware of this power when it unveiled the “Hot Eats, Cool Treats” tagline which, in a memorable four-word limerick, lets us know it does more than just serve ice cream. I, for one, believe it.

Yes, Domino's was forced to retract the 30-minute guarantee after concerns were raised about the safety of drivers, but the tagline still successfully positioned the company as synonymous with prompt delivery, forcing other national pizza chains to compete. And isn’t fast delivery all we really want, anyways? This tagline wins the award for most positive impact on humanity. 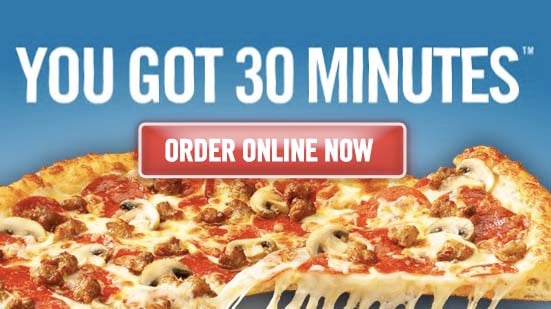 Because now you can recite all the ingredients in a Big Mac by memory. Go ahead, you know you can do it.