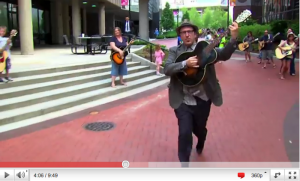 In May of 2011, Grand Rapids grabbed 5,000 of its closest friends and created a video to spark tourism and refute a claim by Newsweek that it was "a dying city." The nine-minute video was created in one take, and the message was developed over months.

It is currently nominated for "Best Use Of Video In Social Media" by PRNewswire. The winner is decided by public vote, and voting ends February 14th.

The relationship between content and context is key: They are not mutually exclusive. Creative content grabs attention, but what sustains a campaign is how relatable the message is.

Celebrity endorsement is great for grabbing initial attention. Recognizable faces draw a crowd. Yet, so often celebrity driven campaigns fall short. Why? If the appeal is not relatable, the audience will not engage. Whether we know it or not, we are all trying to be Nike. We are all trying to be Spike Lee and Michael Jordan - that perfect relationship of messaging and creative that taps into an emotion and creates a market.

Tapping into an emotion can build a campaign. Whether that emotion is humor, joy or awareness is not important. More so, it's making that emotion universal. The Grand Rapids LipDub wasn't just about the city of Grand Rapids. It was about every city. Every city could relate to being down at the time and wanting to create an identity. It was a rallying cry.

Newsweek listed Grand Rapids, MI, as a dying city. The intent of this video was to refute that claim and show why someone would want to visit Grand Rapids.

STRATEGY
We made a universal and relatable narrative. Every city could relate to the feeling of being overlooked or underappreciated. We created an underdog that everyone could cheer for. Tactically, we contacted influencers globally and set up a concentrated network of posts and shares when the video was launched. From there, we used Newsweek as a catalyst for conventional media attention. Giving each conventional media source a piece of the puzzle, we were able to stagger and maximize news coverage over a three-week span. Utilizing influencers and conventional media for credibility, we were then able to drive sharing through social media globally.