The Plain-English Guide to Programmatic Advertising 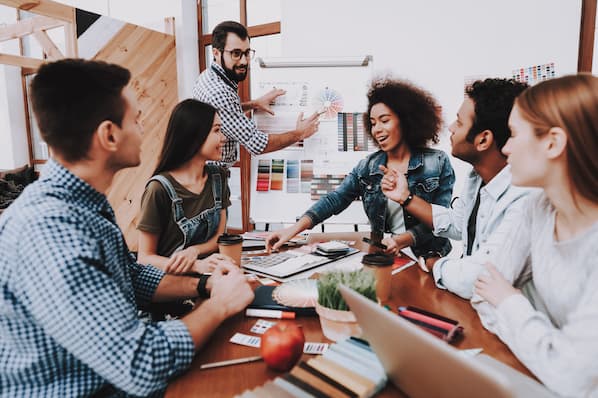 I have Kid's Baking Championship: Halloween playing on Hulu. Currently, there is a commercial break and I'm learning that I can get a low $199/mo lease on the 2019 Nissan Altima, thanks to programmatic advertising.

Programmatic advertising is everywhere, from the podcasts you listen to on your daily commute to the videos you watch on YouTube. These ads also show up in your browsing of social media sites and newspapers. In this article, we'll go over this all-encompassing marketing tool and what they look like.

What is Programmatic Advertising?

Programmatic ads give brands or agencies the ability to purchase within milliseconds because of the sophisticated ecosystem of algorithms. The buying and selling of ads happen in real-time through the automated system.

Programmatic advertising is a fancy term for the automated process of purchasing and selling ads that are online. This method gives advertisers the ability to place their ads on websites with little human interaction because of AI-powered algorithms.

Algorithms collect data from online users to pick ads that cater to their needs. Kid's Baking Championship is a family show. Families shop for cars that are affordable and functional, like Nissan Altimas, so this mid-roll ad works.

What's a mid-roll ad? Don't worry, we'll get there.

Let's look at how programmatic advertising would look in a real-life marketing scenario.

The advertiser for a software company wants to sell more units of software to tech companies, so they employ a programmatic ad platform that can give them data about online consumers.

The data included could be:

After collecting the data, the platform would use data being collected in real-time to pick out online audiences that would benefit the best from these software ads. It then buys digital ad inventory from an auction in places the audience would like to see the software ads.

This way, the ad impact is optimized through the program. All this is also analyzed by the platform.

One of the biggest benefits is that programmatic advertising helps all parties included make decisions that are data-driven, and therefore, gets guaranteed results and ad revenue.

This means it's budget-friendly. You will only spend money on what you know will be effective, based on the software. It's a more efficient way to work with ads.

The fact that you can measure the success of campaigns in real-time means that your campaign management is consolidated and streamlined. Success is in one place, no going back and forth.

Another huge plus? Your audience will be found for you. Your targets will be hit every time using a platform like this, and you can also tailor which devices are best to advertise on. For example, a desktop ad might not have the same effect if the ad is optimized best for mobile, and programmatic platforms will do that decision making for you.

All these benefits are pretty amazing, right? If you're on board with programmatic advertising, let's go over the different types.

When getting started with programmatic advertising, you have options available to make sure the ad is the best optimized for your campaign. The types we'll go over are display, video, social, audio, and native.

These ads appear on webpages. They can appear in the header, footer, or sidebar. The way it works is that advertisers work together with different display networks. Examples are Google, Snapchat, and Microsoft. 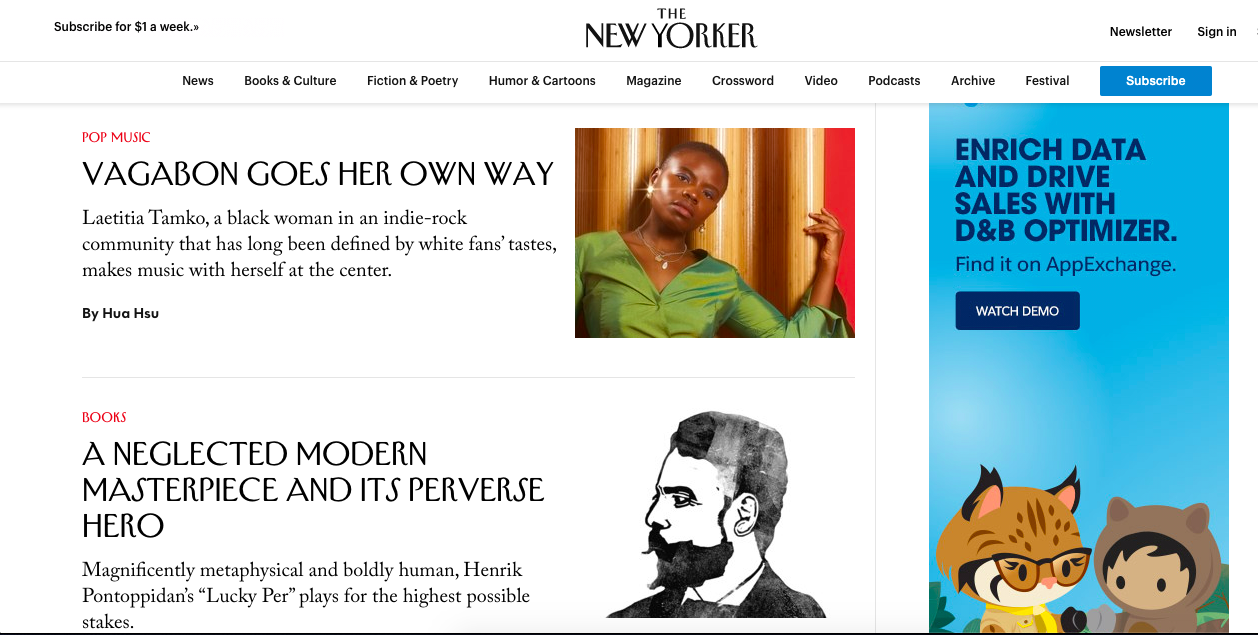 This display ad on the sidebar of The New Yorker's website is for AppExchange, a sales optimization tool. The programmatic ad software could've identified that a large portion of The New Yorker's audience on weekdays between 9-5 are interested in that type of software.

Display ads facilitate the purchase and selling of ad slots, and the money made comes from clicks and impressions data collected by the display network.

Video ads are super versatile, and they're also how I got the Nissan ad while watching Hulu. In that situation, Hulu was the publisher and Nissan was the advertiser. Video ads can be displayed in-stream, pre-roll, mid-roll, post-roll, out-stream, and in display ads.

In-display ads show up as recommended ads on video sharing sites like YouTube. They're clearly labeled as an ad in recommended sections as well.

This webpage on YouTube has an in-display ad in the sidebar as well as what's known as a pre-roll ad. Pre-roll ads are the ones you see before a video begins, while mid-roll is in the middle, like a television commercial.

In-stream ads are displayed within a video, like when a YouTube influencer recognizes the sponsor for their video. Post-roll ads play after the video ends, but out-stream ads are a little different. They're displayed on webpages, in-between articles and videos.

Social ads work by social media sites collecting the data ads need to create experiences that are catered to the user. The data collected will decide who will see ads, formats, and times to display them.

Check out this Coke ad on my Twitter timeline. I'm not a soda fan, but I am a huge football fan (#MonstersoftheMidway). The programmatic ad software probably chose this ad due to my internet history surrounding football.

When social ads are made by influencers, the process is identical. Programmatic influencer marketing identifies influencers, contacts them, and automates the campaign from there.

Have you ever listened to any podcast on a network, ever? If so, how many Blue Apron ads have you listened to? This is thanks to programmatic audio advertising.

My favorite networks, Parcast and Slate, often choose ads centered around home life and personal care, like meal kits and hair dye. Spotify is also a channel for audio ads, especially when using their Freemium version. 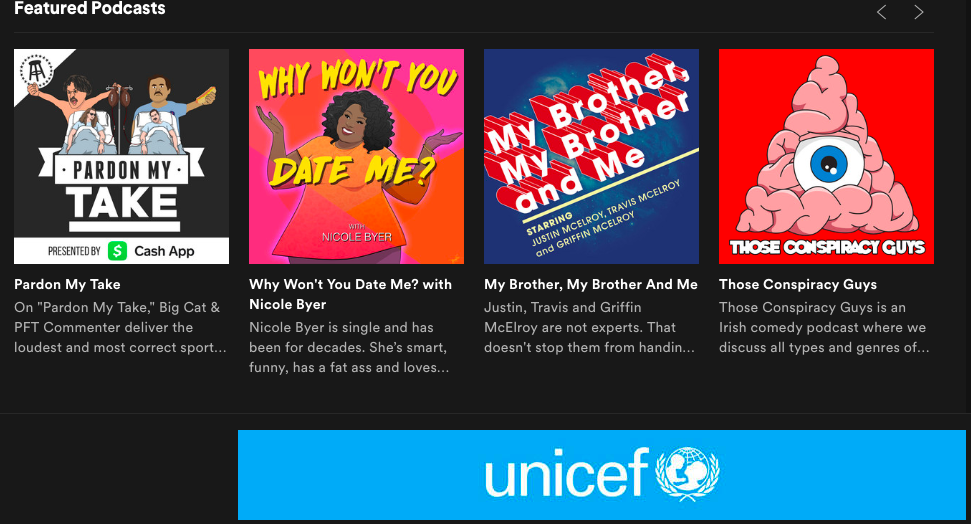 Though you can't hear this Unicef ad, this is a good example of a native ad on the Spotify Podcast webpage. What is a native ad, you ask?

Native ads differ from your standard display ads. While display ads are limited to three places, native ads can appear literally anywhere else. Very handy when you want an ad placed in the middle of a webpage. 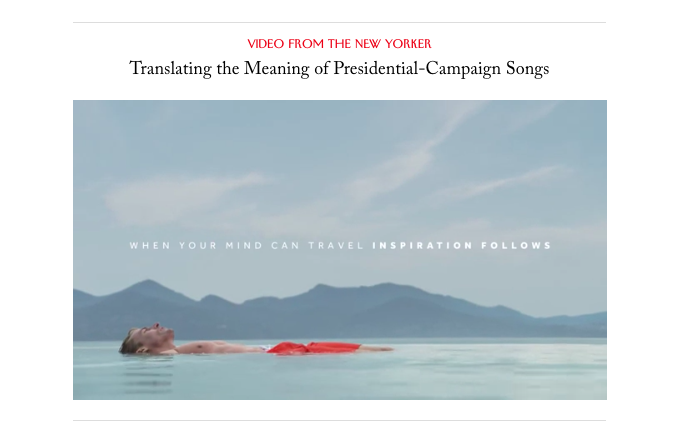 This is a native ad from The New Yorker that was displayed about ¾ of the way into my webpage. Native ads are a good idea if you want to catch a reader's attention in a way that is more direct than a regular display ad.

What does programmatic advertising mean for you? It's a great automated tool to maximize your ad spending and see the results in real-time. You can also see these ads at work by visiting any of your favorite websites right now.

As a marketer, you want to maximize sales from your campaigns as much as possible, and programmatic ads can be a huge asset with that. I may not be thinking about buying a new car while watching Kid's Baking Championship, but some are, and that's the benefit.