Secrets of Success: What Baseball Can Teach You About Your Business

I like studying professional sports franchises and leagues because they are likely petri dishes for regular businesses and markets like mine. The vast majority of professional sports teams are small (i.e. < $200m in revenue) private businesses. However, unlike my private business, much of the information about their inner workings and performance is widely available for public consumption.

Like many markets, major league baseball is relatively "inefficient." Michael Lewis wrote a famous book called Moneyball a few years ago that talked about how the Oakland A's started questioning the "conventional wisdom" around how to measure a hitter's performance. Specifically, the A's statistically proved that baseball team's traditional method of evaluating a hitter's capability based on batting average (hits/atbats), runs batted in, and home runs was less correlated with the team's winning games than new measures, such as OPS. OPS is a player's on base percentage (hits+walks/atbats) plus slugging percentage (total bases/atbats). To give you a sense for OPS and how much it varies from player to player (high standard deviation), have a look at these few fascinating career OPS examples:

Moneyball talks about how the A's used these new statistics to evaluate talent and came up with vastly different relative rankings in a similar way as a hedge fund trader might use an algorithm to find stock market opportunities. For example, the A's are drafting players in the first round that other teams did not have on their depth chart until the 10th round! They consistently let their overpriced talent walk time and time again to teams like the NY Yankees (i.e. Jason Giambi) who could afford them and over-estimated their worth, according to their model.

The A's creative approach was especially important because they were fundamentally disadvantaged in the marketplace by being in a small media/population market like Oakland. The result of being in a small market team is that A's payroll was far lower than the league average. From 2000-2006, the A's averaged $47m/yr while the Red Sox averaged $107m/yr. Despite having only half the payroll, the A's made the playoffs five out of the last seven years while the Red Sox only made the playoffs three out of the last seven years. In baseball, the playoffs matter as a measure of performance because it brings a lot more tv, seat, and concession revenue and it increases the likelihood of long-term fan loyalty.


So, how does all this apply to this blog and to "real" businesses like yours and mine?

Well, it turns out that two of us here at SBH are Moneyball fans. The other day, I excitedly asked my colleague Patrick about the rumor that the Red Sox were going to pick up Todd Helton (at $8m/year) and without missing a beat he said, "I think some Yankees fan has secretly swapped Theo's (Red Sox GM) brain with Steinbrennar's (Yankees owner) brain. Helton's road OPS is .780 and sliding downward." End of discussion in my book, especially since he plays in a "hitters ballpark" -- the number that really is correlated with winning was barely over league average and is dropping.

As a Moneyball fan, I am inspired by what the A's did and want to similarly help my own business find counter-intuitive insights that are most correlated with success. The problem with doing this is that it's hard to see the forest from the trees, especially when wearing a conventional wisdom blindfold. After all, there are plenty of well-educated, smart, experienced baseball executives who just did not see what the A's did, so what makes me any smarter than the well educated, smart, experience software exectives? Nothing. Therefore, I wanted to build a system that would force me to look at the data in new ways and not let me get trapped by conventional "wisdom."

The area where we focused on trying to find these insights is in marketing. Over my career working at a couple of successful companies and consulting with many more, I have always thought that marketing was the least data-driven area and the most dependent on "gut feeling." In addition, this area is particularly appealing because of all the change brought about by how the internet is transforming shopping behaviors .

Below is a graph of the top of our funnel at HubSpot -- our sister site. The grey lines (left axis) represent page pageviews and visitors. The numbers you see superimposed on the graph are marketing "events" which when hovered over show you what marketing activity was done on that day. It is most useful to impose these marketing events right on our traffic graphs, so when we look back over months/years, we can see what marketing events produced real traffic traffic tipping points and which ones are dead on arrival. Much more interesting is the red line on the graph (right axis) which superimposes the number of beta signups (i.e. leads). It is absolutely fascinating to look at the number of leads we are getting relative to traffic when overlayed with marketing events. For example, on this graph, we discovered that having one of our blog articles land on the front page of reddit (see #1 and #4) actually produced more qualified leads than the press release where we announced our GroupSharp acquisition (see #2). Conventional wisdom buster number 1 for HubSpot -- press releases are a lot of work and also a complete waste of time!  Furthermore, we found from this graph that one of the best lead generation days we had was the same day as when we had a guest blogger on the site talking (#6) about his experiences with internet marketing. Conventional wisdom buster number 2 -- our readers are getting sick of us pontificating and want to hear from some of our thoughtful friends! (smile)  You'll notice that some days/events when we post rather uninspired articles (#3 and #5) drive excellent traffic, but that almost none of it converts into qualifeid leads.  The opposite of this phenomenon is in #8 where there was a high level of lead flow with very little traffic -- it turns out that day was a presentation to an innvoation class at Sloan on web2.0.  Conventional wisdom buster number 3 -- do more speaking engagements over at MIT.

This lead conversion functionality we developed is relatively new, so we are still studying the results, but I thought I'd share our initial ah-ha's with you. We are hoping to turn marketing black art into marketing science! 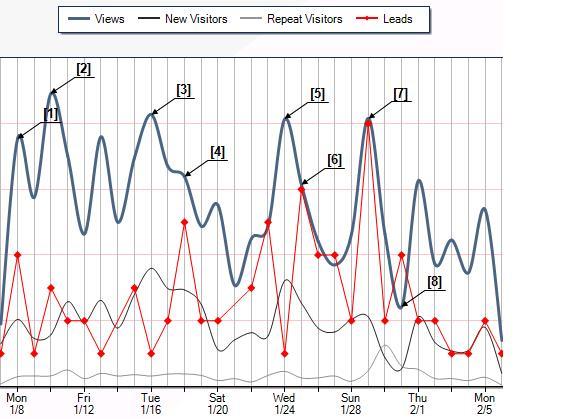 How about you? Do you know which marketing events (seminars, webinars, trade shows, networking events, Google adword purchases, etc.) produce the most interest (traffic) to your business? Do you know if that traffic is correlated with qualified lead flow in your business? Which marketing activities turn into qualified leads and which ones produce useless traffic? We feel that this area of statistical study is a major area of opportunity for small businesses, such as ours. Do you agree/disagree, we'd love to hear from you…