If Clayton Christiansen were running Apple Computer, then...

Today, I want to talk a bit about centralization/decentralization within industries. I think Clayton Christiansen does a pretty good job of explaining the centralization/decentralization of industries and where the profits flow in the value chain depending on where the cycle is. Basically, his thesis is that vertically integrated firms take the lion's share of the profit in an industry when the products are not that good (i.e. pre-chasm). They generally have a big advantage because they do not have to worry about defining boundaries (i.e. api's) between subsections of their products and can just focus on innovating. This is something that Apple has proven they are exceptionally good at. They first proved it with the PC back in the 1980's where they controlled the subcomponents including the operating system and while the industry was in its infancy, it accrued major profits on Mac's using that integrated approach. As the industry matured, the buying criteria started changing to price and the "boundaries" between the subsections were detailed sending the profits away from independent architecture providers like Apple to multiple tiers in the value chain, such as Microsoft, Intel, memory companies, disk drive companies, etc. 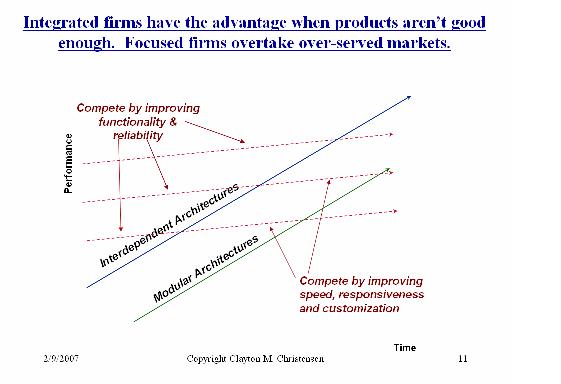 The following is Christiansen's specific take on the how the value chain in the computer industry has changed. It is most interesting to see how much the industry has decentralized over time and how the profits now accrue to the subsections in the value chain versus the integrated suppliers, such as Apple. 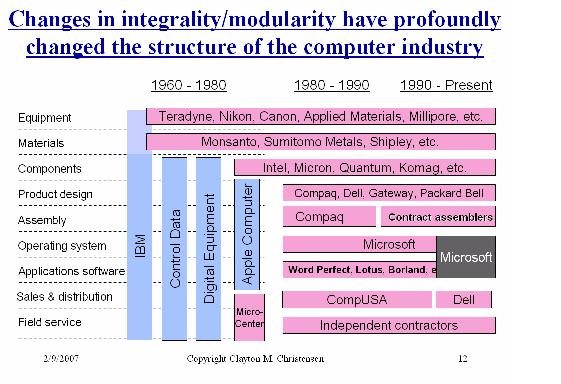 At some point in time, there may be another disruption in the computer industry that will cause it to consolidate again. For example, the buying criterion moving to a new price point to serve underdeveloped countries might end up creating a new integrated player in the pc space who controls the boundaries of a new device that can be sold for $100 or less.

I suspect that we will see a similar decentralization in the online music industry. Just as they did in the PC industry 20 years ago while the category was in the "not good enough" phase, Apple has seized control of the subsections/interfaces between the components within the mp3 player (ipod), the music delivery application (itunes), the music itself, and the distribution (Apple stores). As they did with the pc, they are optimizing around the buying criteria of ease of use because prior to ipod/itunes, "you'd have to be a high school student" [I borrowed that line from Christiansen] to figure out how to make this type of stuff work. By not having to worry about designing the boundaries (api's), Apple lowers its "transaction costs" and can innovate quickly. We are still in the early phase of this industry and Apple is earning the lion's share of the profits. It will be interesting to see who the winners are as the industry decentralizes. In particular, it will be interesting to see how Microsoft's strategy plays out. From my perspective, Microsoft is making a mistake by trying to play the same game as Apple here and controlling the end-to-end experience, rather than sticking to it's knitting and trying to control a strategic layer that enables this industry to split apart.

One of the problems with this model is that it's a bit hard to know where your industry is in it's development. For example, Apple has been earning huge profits on its itunes/ipod business for several years now -- are there many more years to come or are they facing near-term de-centralization as the buying criteria shifts from simplicity to something else (i.e. price, features, other)? It is likely doing its best to keep the interfaces between the pieces of the value chain locked up (trade secrets, patents, exclusivity with parts suppliers, etc.) and keep customers locked in, but how long can they hold on?

It is probably helpful to think a bit about what's happening in your industry? Are the profits centralized around integrators of functionality? Are the boundaries between the subsections of your industry starting to break down? Is there reason to believe that a disrupter could be coming along at the low end?