The Online Anatomy of a Spreading Story

Last night, U.S. forces killed “the most wanted face of terrorism,” Osama bin Laden. However, this is not a political blog post or a commentary on the event. Instead, it is an examination of how technology has drastically changed the word-of-mouth spread of information. Traditional media, TV and print newspapers, couldn’t keep up with the story as fast as new, social media could draw the evolving picture.

This dynamic teaches important marketing lessons about the power of self-publishing, diffusion of news and the future of information gathering.

As you might have already learned, the news about Bin Laden’s death first leaked on Twitter. The White House communications director, Dan Pfeiffer, announced on Twitter that the President of the United States will address the nation at 10:30 p.m. Eastern Time on Sunday, May 1. This act demonstrates the power of self-publishing tools and the subduing power of media as the messenger.

The marketing takeaway is that today, you don’t need to knock on the door of journalists if you want to get the word out about something. If you build a large following, you can publish a story yourself and expect the press to come to you. 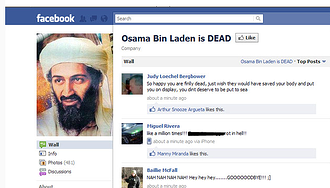 Don’t know about you, but I first learned about the story from Facebook. The status updates of all my friends had started to reflect the evolving story. They were leaving comments and heatedly discussing the news. In fact, Adam Ostrow wrote that within hours of the reported death, ‘a Facebook Page titled "Osama Bin Laden is DEAD" had already accumulated more than 150,000 ‘likes.’’

Who you learn from hasn't changed, it is still friends and family. But today, they won’t make a phone call to spread the news--they might post it on Facebook and expect to see a discussion take place. The marketing takeaway here is to realize the increasing potential of the Facebook news feed in delivering information and prompting action.

Lots of people watched Obama’s speech on their televisions. But if you happened to learn about it online, you could have as well gone to www.whitehouse.gov and watched the live streaming of the announcement there. CitizenTube, YouTube’s channel on news and politics, was also broadcasting the President’s live address. In other words, the video was one click away from your current view.

From start to finish, the story progressed on the Web. One could learn everything there was about it without turning the TV on. The virtual ecosystem carried the news from it’s leak on Twitter, to its spreading on other social media channels, to the actual video announcement and to the post-analysis on news sites and blogs.

What has this event taught you about the spread of information online?