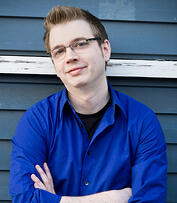 Dan is our internal social media scientist here. He is the author of The Social Media Marketing Book and the co-author of The Facebook Marketing Book , which he wrote with his wife, Alison. He's also a social media speaker and has been mentioned in a variety of different media publications, such as The New York Times , The Wall Street Journal , The Boston Globe , and Wired .

For the full recap and transcript head here: Justifying Social Media With Real Numbers About Real Money With Dan Zarrella

Being a Social Media Scientist

"So as a social media scientist, I like to get beyond those unicorns and rainbows and look at the actual data about how people behave online, why they behave that way online, and how marketers can leverage those behaviors."

Dan takes a more scientific approach to social media by basing his information on data instead of on fluffy, "what feels right" truths.

"If you're measuring anything, that means you're spending resources - be it time, be it money - into social media. If you're spending money and time doing these things, the first thing you need to measure is how much is it making you ."

According to Dan, the most important metric to measure in marketing (social media or otherwise) is how much money it’s making you – not just leads, but actual customers.

"The most amazing thing about HubSpot, especially my experience here, is the support and the fuel and the push that the rest of the marketing team gives me. We have a huge email database. We have over 100,000 followers on Twitter. We have a giant blog. So to start off, we're leveraging those things."

Dan currently holds the HubSpot record for the most webinar attendees (in the neighborhood of 25,000 for this webinar ).

Here are some important tips for planning, promoting, and hosting successful webinars:

"There are two different uses of Facebook, and you really need to understand that and go at marketing on Facebook with a Page, not a profile."

If you’re doing marketing with Facebook, you should have a Page. If you have a Facebook profile, and you're using it for marketing, Facebook can shut it down. If that's not enough incentive to move to a Page, then all the analytics, ads, and insights Facebook offers for Pages should be.

But if you're using a profile right now, no worries. Facebook has an easy pathway to change from a profile to a Page.

"If you're a little mom and pop cupcake shop on the corner and the pizza shop across the street has a Page, you can go and comment on the pizza Page and say, 'Hey, come over for dessert afterwards.'"

Facebook now has the ability for you to use Facebook as a Page vs. your profile. So you can 'Like' things as your Page, comment as your Page, etc. – instead of as your personal profile.

The free tool generated several thousand new email sign-ups. Celebrities tweeted about it. TweetWhen helped to create an event around the webinar.

"I think one of the most key things from all of my data that I've found is that self-reference is not contagious."

If you're on social media to build your reach or to market a product or service, stop talking about yourself. That type of content isn't shareable.

"Stay away from talking about yourself, but talk as yourself," says Dan. People read a blog or follow someone on Twitter because they like their unique perspective. People want to hear your take on what's happening, but not what you're doing.

You should be talking about your followers, fans, and readers. Talk about what you've done and how that can help others.

The Future of Social Media

"I think social media, and the marketer in general, is getting much more technical."

While internet marketers don't need to be programmers, they probably do need to know some HTML and CSS. You need to know what a soft bounce and a hard bounce is. Marketing is more technical than it was 10 years ago.

"Another thing that I think is huge in social media right now and is going to be more, is that the lines between online and offline are blurring."

It used to be that what you did and who you talked to online didn't affect your offline world. But now it does. You can go to dinner, snap a picture of your beer, tweet it, and the bartender sees it and offers you a taste of another beer.

"I think stuff like augmented reality is going to be really, really huge." This would be things that blur the line between the web and the real world: location-based services, mobile apps, etc., like Google Goggles , the Yelp app , Foursquare , etc.

"The most recent data that I've published is that 33% of all Facebook postings are done mobile."

It's no longer just desktop computers. It's tablets, netbooks, laptops, mobile phones, etc. Brick and mortar businesses need to show up now by claiming their Google location page , getting active on Yelp, and being on Twitter and Facebook.

You can follow Dan on Twitter @danzarrella and connect with him on his blog . He also writes for the HubSpot blog and has a couple of books you should check out: The Facebook Marketing Book and The Social Media Marketing Book .