Ashkon on Technology's Influence in Getting Found Online 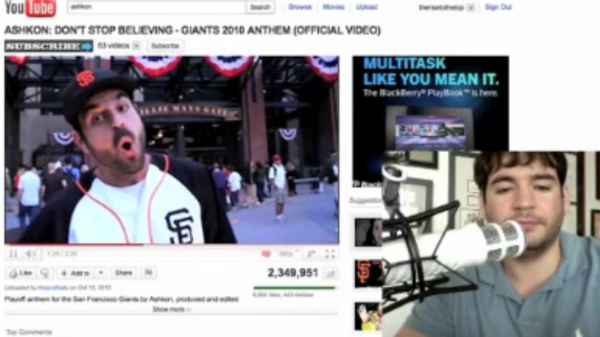 Not a double threat, not a triple threat, but more like a jack-of-all-trades, Ashkon [Davaron] can rap, sing, act, and write songs. He loves what he does and claims to do whatever project he’s feeling at the time. Jumping into California’s Bay Area hip-hop scene in 2006, he debuted “The Final Breakthrough” album and progressed to create internet music video hits like “ Hot Tubbin’ (On the Late Night) ” and the San Francisco Giants’ anthem of “Don’t Stop Believing.” Scoring over 2.3 million views? Virtual success.

Taking a break from playing Beardo in the “crazy musical romp” and stepping aside of his web shows/vlogs, this internet singing sensation chats with The Rise to the Top ’s David Garland about getting a job done and the influence of technology.

Do It, And Do It Right

If a project can turn out to be worthwhile in the long run, you can make it a fun completion process. Some things catch on in an instant; some things take time. But there is always a method, even if it’s a crazy one. Take Ashkon’s story in a nutshell -- it's random, but quite simple:

“My involvement in theater in college… that introduced me to this guy that down the road sees my video. He has his podcast and his blog; he posts my video on his blog. The comedy editor from YouTube likes his blog, checks it out, sees me posted on his blog…”

Work It With Technology

The increase in technology, in general, shows there are so many resources to create things in a number of different mediums. If you have a good idea, there are endless opportunities that can come from that idea. If you have an idea and want to work hard to make it happen, it’s possible. It sounds fairytale-like, but it’s true. Just based on resources, making it out there today is not like it was 20 or 30 years ago. You don’t need a Hollywood deal or a big record label to become known.

Take a page from Ashkon and, as a business, take advantage of content creation as a core method for getting found by your prospects online.

Has Ashkon's story inspired you to create?