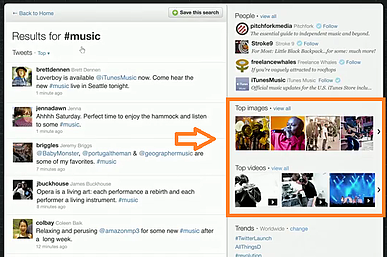 Yesterday, Twitter announced it will start rolling out a new version of its search functionality, complete with photo and video results.

Twitter also revealed its plans to make photo sharing on Twitter even easier in the coming weeks, when it will launch the capability for users to upload a photo and attach it to their tweet directly from Twitter.com as well as Twitter's official mobile apps. The ability to share photos on Twitter has traditionally only been made possible via third-party Twitter applications like Twitpic or Yfrog.

In addition, Twitter is also working with various mobile carriers around the world to enable non-smartphone users to send photos to Twitter via text message (MMS).

For a visual representation of Twitter's new search functionality, check out the video below (no narration necessary)...

Twitter's new search enhancements emphasize the web's progression to a richer and more relevant search experience for users. It also highlights that the battle for search engine usage is heating up. With the implementation of enhanced search features on social networks such as Twitter and Facebook, traditional search engines like Google and Bing are now facing more competition in the search space.

For businesses that rely on visual elements such as photos or video to best portray their products and services to prospects, this is a major benefit. Marketers should particularly be aware of the hashtags and keywords they are using in their tweets, and be sure to optimize their tweets with these terms -- especially those tweets that are accompanied by a photo upload, which might show up in a Twitter user's search results.

Twitter's new functionality also emphasizes the need for marketers to create and share various types of content. Because photos and videos now have a place in search results, it's important to take advantage of those types of content assets and remember to optimize them for search as well.

What do you think of Twitter's improved search functionality?