Recently, conservative TV-host Glenn Beck launched his own online video network, GBTV . Beck will be leaving Fox News at the end of June and starting his daily online program in September. But what does this have to do with marketing?

A lot. The instance of a popular political figure leaving traditional media and then joining the web space is illustrative of a bigger theme. It emphasizes the power of building a brand online . Don’t believe me? Let’s break down Beck’s move:

Audiences Are Shifting to Digital TV

Beck knows that people are spending time on the web, and he expects his audience to find him online. His viewers will be online not only when are doing research, but also when they want to be entertained outside work. It’s just another reinforcement that this new shift in consumer behavior is real and becoming more apparent. As Joel Cheatwood, a Fox executive also moving to GBTV said , the web “really is where the growth exists.”

Stay Ahead of the Curve

In The New York Times article covering the story, Beck was quoted as saying, “I think we might be a little early. But I’d rather be ahead of the pack than part of it.” This early adopter type of thinking is the type a marketer needs to have—better early than sorry. You want to be ahead of the rest because that will afford you with some competitive advantage.

Take Full Ownership of Your Assets

One of the recurring themes in the coverage of the story was Beck’s ownership of the channel. Unlike his show on Fox, online he is the one in charge of both the creation of content and its distribution. He doesn’t have to deal with gatekeepers.

Marketers also need to realize the power of owning and controlling their online assets. As HubSpot’s superstar customer Marcus Sheridan likes to say figuratively, you need to hold the keys to your store.

On-demand content is growing in importance for viewers. People like to consume content when they want to. They bookmark articles to revisit them later, and they watch videos at their own pace. Why should they have to switch on the TV to watch a show at a specific time when they can record it with their DVR to watch later or view it on a web page at any time? As a marketer, you need to consider this on-demand value to your visitors and make the content you create available whenever they want it. Hosting a live webinar? Record it and archive it for people who missed the live session. 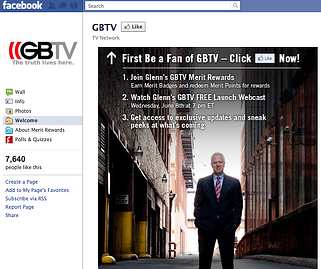 By visiting GBTV, you will see that the channel already has a Twitter and a Facebook page . What is more, nearly 8K Facebook users already indicated they liked the show. But Beck’s focus on social media doesn’t stop there. He has also launched a Facebook game in which community members can earn Merit Badges by participating on the page (whether that means leaving comments, answering poll questions, or responding to other challenges). The strategy and goal here is clear—nurture the community and encourage people to interact with GBTV’s online assets. A very similar goal to what marketers aim for, isn't it?

So aside from Beck's political views, what do you think of his prophetic approach to marketing?