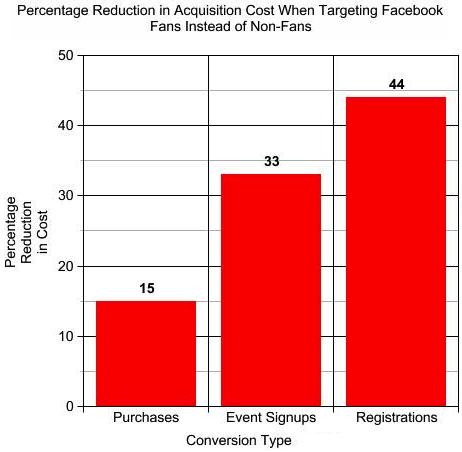 For marketers, Facebook can sometimes be mysterious. The leading social network has many moving parts including Pages, Places, Groups, and more. One of the most difficult tight ropes to balance is how to use Facebook's paid advertising opportunities alongside its organic, free resources like Facebook Pages .

" By advertising to Facebook fans instead of non-fans, advertisers can reduce the acquisition cost of registrations by 44%, event signups by 33%, and purchases by 15%. "

This data was derived from a 4.1 billion ad-impression, thirteen-client test run by TBG Digital.

The post goes on to provide the following example:

" For instance, if a health care company planned on acquiring 1 million registrations over a year via Facebook ads at $10 per registration, it could save $4.4 million by advertising to its Facebook fans instead of the general Facebook population. This means if the cost of attaining enough fans from which to secure 1 million health care registrations is less than $4.4 million, the company has produced a direct return on investment on its Facebook fan acquisition strategy without even counting the value of being able to communicate directly with the fans through Page updates. "

In marketing -- and in life -- common sense prevails. It only stands to reason that Fans of your Facebook page who already have some familiarity with your business would be more likely to take a next step like registering or purchasing. It's an easy mistake to disregard Facebook Fans as being part of your marketing reach already and instead spend your advertising dollars trying to motivate non-fans.

The problem is that even though someone may be a fan of your business, they are still a long way away from being an actual customer. This data supports the idea that marketers should spend more of their efforts, both paid and organic, to move existing fans further along the sales cycle and convert them into leads and customers.

Have you had success advertising to existing Facebook fans?