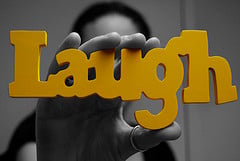 The line between the two professions is blurry indeed, and we shouldn't be surprised that comics like Jimmy Carr and Tim Sidell (aka @badbanana) had prior careers in marketing and advertising . They likely learned a lot from us! But now it's our turn. Here are three important principles to bolster your social media strategy , extracted from the tips of the stand up trade.

Hecklers make stand-up comedy a full contact sport. In smaller clubs, where patrons set their drink on the edge of the stage, back and forth with audience members is almost always part of the act.  And it doesn’t go away on bigger stages, either. I saw Jerry Seinfeld at Foxwoods a couple of weeks ago, in a massive ballroom, and he lambasted a heckler who was sitting at the back of the 2nd balcony, at least 70 yards from his mic stand. Detouring out of rehearsed material and into a conversation with a heckler is in a comic’s blood, and it should so too be part of how you use social media.

Marketing Takeaway:
You can schedule posts all you want, but a truly remarkable social media strategy is steered by someone who can go “off-script” to respond to unsatisfied customers or brand detractors. Doing so on the open and transparent forums will go miles to repair relationships, as well as increase the confidence of onlookers.

Who remembers Gallagher? He was a standup in the late 80’s and early 90’s who made a name for himself by smashing watermelons with sledgehammers on stage (talk about remarkable!).  Folks with front row seats to his shows typically found rain coats waiting for them on their chairs, like they were opting for the “Splash Zone” at a Sea World show.  His use of props and penchant for liquid explosions added a dimension to his jokes, persona and performances that other comics didn’t have.

Marketing Takeaway:
Apply that principle to your social media strategy by including videos, pictures, surveys, and other types of dynamic content. Linking to website content is great, but text is one-dimensional and can get boring for folks following your brand on places like Facebook and Twitter .  Videos and imagery of you doing what you do, will enrich and deepen thier understanding of who you are.

3. Know Why They Laugh

George Carlin was a philosopher for the damned.  Bill Cosby satirized the nuclear family. Sam Kinnison shocked audiences with screaming serenades to ex-girlfriends.  They knew what chords they struck with their audiences, and wrote and performed material with those chords in mind. Whether they did ‘focus groups of one’ by the bar after the show, or measured reverb on the laugh-track machine – we’ll never know – but they knew what they were doing.

Marketing Takeaway:
You should likewise always keep a hand on your audiences pulse.  Be cognizant of what they like – doing so will help you avoid posting content that gets crickets, as they say. Measure interactions and traffic from social media as often as you can, and use that data to inform what you share next.

What other comedic lessons have you put to work in your maketing strategy?