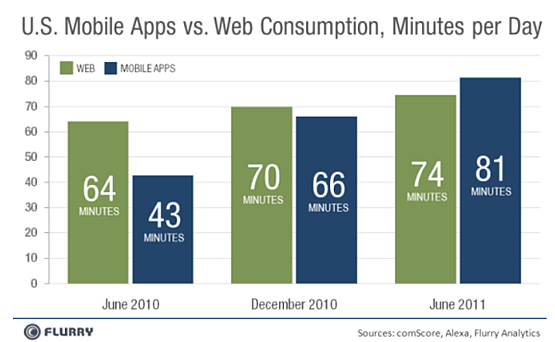 People are spending more time inside mobile application on average than they are on the web, according to Flurry , a mobile analytics firm.  Playing games and social networking absorb 79% of people's time, according to Flurry. The rest is news, entertainment, and other apps.

Flurry measured the time people spend in apps through its own direct analytics. It was able to get the numbers for the web using public data from comScore and Alexa. According to Business Insider , "The analysis is "somewhat imperfect", but even if you judge it solely on a directional basis you can see mobile apps are consuming more and more time."

The internet started to make inroads into our lives as marketers just 15 years ago, and it's hard to comprehend a day without Google now.  The way we use the the internet has changed too.  Simply stated, our usage has gone from online directories (Yahoo!) to search engines (Google) and now to social media (Facebook).  Built on the desktop and notebook PC platform, the web’s popularity is significant.

Now, a new platform shift is happening with smartphone and tablet shipments exceeding those of desktop and notebook shipments and a new group of users will come to expect their smartphones and tablets to have instant-on connections so they, too, can connect to the Internet.

What are you doing to make sure that you can be found easily via desktop or smartphone?