Facebook Conversations Do NOT Lead to More Views [New Data]

For more mythbusting and social media science, don't forget to register for my  Science of Social Media webinar .

In my study to understand the effects of "engaging in the conversation" in social media, Facebook was one of the places where I actually thought "conversation" resulted in better reach-building and marketing effects. But I was wrong .

I looked at two variables available only though Facebook insights (data you can only get when you're the admin of a page): Impressions-per-post and feedback percentage per post. I calculated an impressions-to-likes percentage for each post over the last 12 months for the two large pages I have access to (HubSpot and OnStartups). I then compared that number to the amount of feedback (likes and comments) each post got. I expect to find that they were positively correlated, the more feedback on a post, the most views it got. But all I found was a weak, negative correlation . 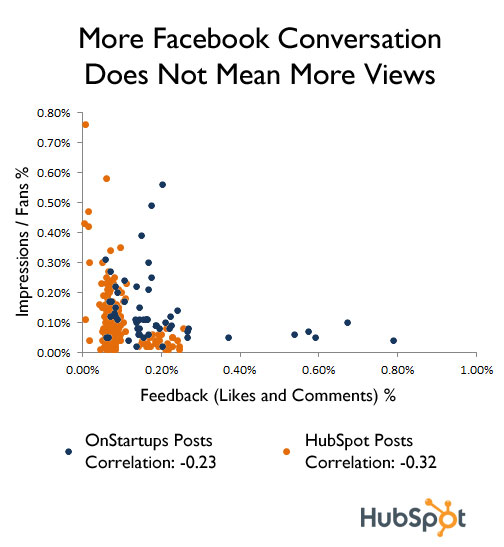 I also looked at the relationship between feedback on a post and the number of impressions the next post got, and found the same (non-existant) relationship.

As the data shows, (and as EdgeRank suggests) the amount of "conversation" that happens on your Facebook posts has nothing to do with the number of people who will see it. Once again, we find that conversations have very little (if anything) to do with reach-building social media marketing effectiveness .