How to Use Social Media to Maximize Your Trade Show Presence 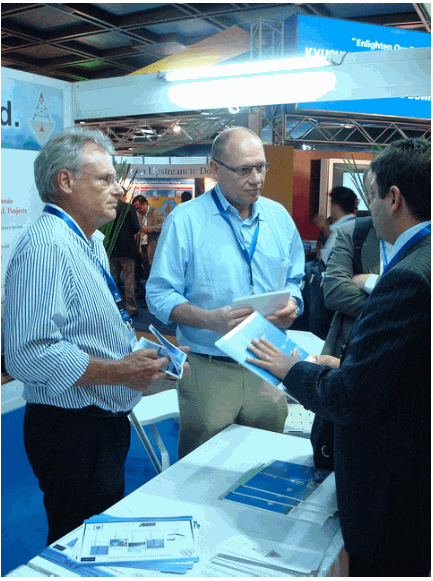 This is a guest blog post by Dave Clarke, an award-winning editor and editorial director in the marketing departments of Fortune 500 companies such as Oracle and Symantec. He is currently editorial director for Hologram Publishing , a provider of custom content for companies, large and small.

As virtual as marketing has become, what with SEO, email marketing, Facebook marketing, Twitter feeds , and the rest of the online universe dominating campaigns coast to coast, trade shows remain firmly rooted in the physical world.

Trade shows are places to meet and greet, schmooze, and hopefully, gather leads by the bucketful. But they are also one of the most competitive battlefields in business. After all, where else are all the competitors in any one sector lined up row after row, one after the other, competing for customers?

A physical trade show presence and a virtual presence are not mutually exclusive, though; in fact, just the opposite. Ratcheting up your social media marketing , before, during, and after a trade show is proving one of the most effective ways to drive traffic to your booth and cement the relationships you’ve come there to forge. And when it comes to collecting those all-important leads, social media is second to none.

Here are some ways you can leverage social media to get the most out of your trade show presence:

“The business value of Facebook and the other social media is still largely untapped at trade shows,” says Scott Wherley, vice president of global customer insights with Reed Expositions , one of the world’s largest event organizers. “Some companies are doing it well, but many are not making the most of this opportunity.”

Wherley says manufacturers, for example, are sending out tweets during the show, offering discounts on their products for those who come to their booth within a prescribed time (say, the next 30 minutes).

Other companies are posting to their blogs several times a day before and during trade shows. In the days and weeks leading up to the show, they are building buzz about the event. During the show, marketers are posting “Special Reports,” updating show attendees from the trade show floor about upcoming presentations and special sessions, and, simultaneously, keeping their blog subscribers who were unable to attend the show in the loop as to what they’re missing—all while creating valuable, fresh content that boosts SEO and creates and sustains awareness.

Susan Friedmann, AKA The Tradeshow Coach , also believes social media can be an invaluable weapon in a marketer’s trade show arsenal, but she emphasizes that while the means and media to reach trade show attendees is evolving, the fundamentals of producing a successful trade show event remain largely unchanged. “The biggest mistake I see companies, large and small, make when approaching their trade shows,” Friedmann says, "is not setting quantifiable goals for the show.” And that applies to your booth marketing as much as it does your social media marketing, she says.

Friedmann says if one of your objectives for the show is to gather leads—which is the goal for 70-80 percent of companies attending trade shows—quantify that goal. “It’s not enough to say, ‘We want lots of leads.’ If doing demos for prospects is part of the plan, determine ahead of time how many demos you’re targeting. Use your social media marketing and the analytics it provides , Friedmann says, to help you reach specific goals, such as, “We want to gather 300 leads, do 50 client demos, which, within six months, will lead to five sales worth a total of $10 million.”

Linda Musgove, the Trade Show Teacher and author of The Complete Idiot’s Guide to Trade Shows , recommends creating special groups on LinkedIn before your trade show. This way, you can post relevant information about the show, and your customers and prospects can weigh in with their thoughts both during and after the event.

The opportunities to leverage social media marketing at trade show are only just beginning to blossom. Have you seen some real attention-grabbing uses of social media at recent trade shows? Did you stumble upon a social media trade show nugget that drove prospects to your booth in bunches? Let us know how you’ve seen social media used at a trade show to drive traffic, build relationships, and close the sale.