Google+ to Hit 20 Million Users In Its First Three Weeks

On June 28th, Google unveiled its most prominent entry into the social networking space with Google+. We covered the launch and its initial features , but how has it performed since? Well, Ancestry.com founder Paul Allen has done some interesting analysis of the growth of Google+ , and in his research he found that "Google+ users worldwide reached 7.3 million yesterday (July 10) – up from 1.7 million users on July 4th. That is a 350% increase in six days." He also projects that Google+ could reach 20 million users by this coming weekend if Google keeps its Google+ invites available.

I recommend reading all of Allen's post to dive into his methodology for gathering this data. This kind of user growth is impressive, but understand that Google+ is still a tiny player in the social networking space compared to Facebook's 750 million users. 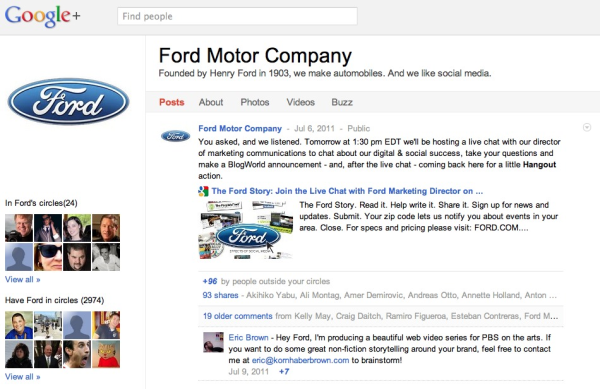 We haven't written a lot about Google+ up until this point mainly because, at launch, it did not allow for businesses to create profiles as they can on Facebook with Pages. However, this issue is starting to get resolved. In an interview with Ad Age last week, Google product manager said that brand pages will begin to roll out in two weeks. Yesterday, Ford Motor Company became the first business to land a profile on Google+, so it looks like that timeline may be accurate. Google has also released an application for businesses interested in becoming one of the first to get access to profiles.

It's About Search AND Social

Yes, 20 million users aren't very many when compared to other major social network players. However, it's pretty impressive for a search engine company looking to radically improve recommendations and rankings. Google+ is going to be a major source of data for Google. As a business, having a presence on Google+ will be about more than just social media marketing. It will also be about maximizing traffic from search engines as algorithms evolve.

SEOmoz has already published a great article with data about Google+'s impact on social sharing for some of the internet's most popular sites. When it comes to Google+, it is important to remember that +1s that occur on Google+ will be associated with links in Google search results, potentially impacting the click-through rate from organic search, increasing overall search traffic.

Google has learned from its mistakes with Google Buzz, and early data seems to demonstrate that Google+ could be a viable newcomer in the social networking space. As a marketer, you need to get an early start. Apply now for a business profile for your company, and begin promoting it as soon as it's granted and completed. As Google+ continues to grow, look at your referral and search traffic to see how your content sharing is impacting traffic and leads for your business. Remember: this is only the beginning for Google+. Pay attention for future feature announcements.

Are you surprised by the Google+ growth projections?