Google+ is hot. We have been blogging about it a ton since its launch. This infant of a social network hit a major milestone today,  passing the 20 million users mark. Below is an infographic showing the top 10 countries for Google+ users, courtesy of the Wall Street Journal .

To help put this user growth into perspective, Leon Håland created a graph to show the paces at which Google+, Facebook, and Twitter all hit 20 million users. 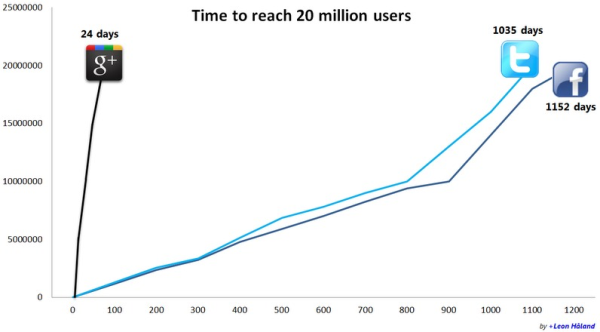 Yes, Google has huge reach and an existing user base, but the rapid adoption of Google+ is still impressive. It seems that Google is making a major push in the social networking space. All Things D is reporting that Google will soon launch and Games on Google+ to directly compete with Facebook. Google is said to plan to take a lower cut of gaming revenues than Facebook does, which could be a major blow to the social networking giant.

Google+ is growing faster than expected. As a marketer, it is important that you sign up for the free service and understand the mechanics of how information is shared. Soon Google will be rolling out business profiles, which will be a completely new way for companies to leverage Google+. However, we have already started to see the impact Google+ is having on search engine optimization.