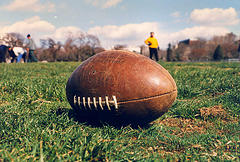 Those of you in tune with headline news know that this past Monday was a big day in the sports world, marking the end of a 132-day lockout of the NFL players .  The collective bargaining agreement (CBA) of the NFL players’ union expired in March, and the fact that a new contract had not been put in place before the previous one had expired resulted in a prolonged delay in negotiations of a new contract.  Meanwhile, all player activity, including training for the upcoming season, had been put on hold.  The two sides of the battle – the owners and the players – struggled to come to terms on a wide variety of issues, including salary caps, free agency, and the number of games played in the season.  The entire process of settling a new contract has evoked widespread attention from the media and sports fans alike.

As marketers, what can we learn from this whole ordeal in the football world?  Here are 3 major lessons from the lockout that can help you improve your marketing:

What are some other lessons marketers can take away from the NFL lockout?  Have you ever had any marketing “lockouts”?  How did you get out of them?