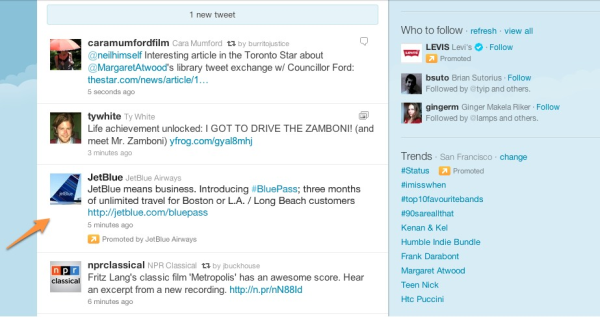 However, an ad will only appear to a user if he or she is already following the account that purchased the ad.  These Promoted Tweets will appear at the top of a user's feed on Twitter.com, but as the user gets new tweets, it will be pushed down the page, just like other tweets.

In an interview with TechCrunch , Twitter's Head of Global Revenue Adam Bain shared a couple of interesting insights about Twitter's Promoted Tweets.

Bain said, "We’ve found that 20 to 40 percent of users follow one or more brands on Twitter,” he explains, noting that this is extremely important. (The stat is based on third-party research and is so wide because the definition of “brand” varies.) He continues, “Users want to be updated when brands have updates or exclusive content. The one problem we’ve heard from users is that when there is exclusive content or deals, there’s a chance they might miss them.”

Bain goes on to explain that, while traditional online display ads only get a click-through rate of around .05 percent, Promoted Tweets are seeing engagement in the double digit percentages. The program is launching with companies like Dell, HBO, Red Bull, and Sephora.

Twitter has stated previously that it plans to launch a self-service version of its Promoted Tweets platform to small businesses by the end of the year.

Social networks are growing up. Advertising is clearly only going to expand on social media services. As a marketer, it is critical to test emgering advertising opportunities to understand how they work to help accomplish your specific business goal . Keep an eye out for Twitter's release of its self-service platform later this year. Only time will tell how users will embrace this new type of advertising on Twitter.

What is your opinion on advertisements coming to your main Twitter stream?