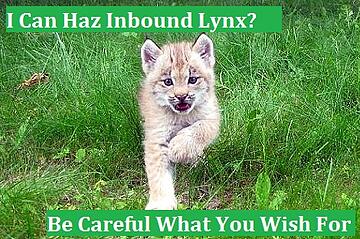 “ Lolcats ” is an internet meme where pictures of cats are captioned for comedic effect. Similar in concept to demotivational pictures, they’re amusing and simple graphics to create. (The one to the right took me about 45 seconds.) Lolcats are just one of many potential humorous devices that could help influence consumer behavior in ecommerce.

Now that you've taken a few moments to wonder what on earth Lolcats have to do with ecommerce, let me explain. While not traditionally considered part of standard marketing media, there are indeed some ecommerce applications of humoristic tools that can improve the user experience for your potential customers.

Humor is being taken more seriously from a technical marketing and psychoanalytical perspective. In fact, Boston was recently host to the 2011 International Society for Humor Studies conference where experts in psychology, linguistics, sociology, communications, and other fields gathered to discuss and debate the implications and research surrounding the impact and implications of tactically applied humorous devices.

So how exactly can humorous devices be used to increase conversions in ecommerce?

1. Emotional Influence : Humor is a legitimate method used successfully in a great number of marketing campaigns. As we speak, Old Spice's Fabio vs. Isaiah Mustafa battle dominates the viral leader boards. Humor creates a positive favorable perception of a product or brand, which correlates to purchase conversions. Humor is most effectively applied against “low-involvement offerings” where the decision-making process is not as emotionally intense for the consumer, and therefore, minor emotional influences can have a greater effect. While appropriate for deodorant, it’s not a tactic with a highly effective impact in long-cycle B2B sales.

2. Authenticity and Trust : Because making people laugh and smile has such a significant positive psychological impact, the utilization of humor can create a perception of personable authenticity. Humor’s ability to elicit positive emotions also has a positive correlation to trust, which is a common issue for ecommerce websites.

4. Personification : Because humor is a psychologically intimate experience and one that’s based on shared experiences and perceptions, the proper execution of a humorous device also creates a greater sense that a real, relatable persona is behind the impersonal exterior of an ecommerce website.

5. Simplicity : In 1988, Yan Zhao’s study theorized that humor possessed an equal – and in some cases greater – semantic potential for conveying information. Humor allows you to convey messages in simple, easily digestible pieces. Product features, cautions, and alternate uses are all potential elements that can be conveyed using humorous devices.

6. Errors : Every large ecommerce site has errors on occasion. Using a humor device for error messages like a the HTTP 400-500 error code series can help defuse the frustration of experiencing errors by again eliciting a positive emotional response.

7. Pathos : One of the most infrequently utilized rhetoric tactics in ecommerce is Pathos, or emotional appeal. Lolcats and other various humorous devices are fundamentally based upon their ability to elicit positive emotional responses. While it’s not the rhetorical appeal most often or directly correlated to an increase in conversions, the growing body of research backing its influence on consumers' buying behavior is compelling. You can certainly compete on features (Logos) and you can add all the trust signatures you want (Ethos) but consider carefully how emotional appeal can be incorporated into your ecommerce site and marketing methodology .

A Word of Caution

Humor can be a dangerous device that must be implemented carefully. Consumers can often be incredibly sensitive, and this sensitivity coupled with the ease of sharing negative sentiment on the web can be a devastating combination for your business. Consider that different demographics may react to humor in different ways and that although jokes may be topically significant, the context may not always be immediately evident. My reference to Lolcats, for example, will inevitably fail to impact those readers not familiar with the traditionally flippant and immature nature of this particular meme and its contrast to inclusion in a serious marketing article.

Have a comment, argument, or agreement about this article? Have a favorite humorous device you’ve seen executed for a marketing campaign? Or would you just like to share pictures of cute animals? Share it with us in the comments!