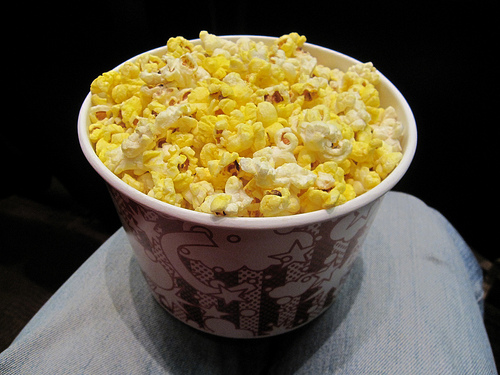 It seems even harder to avoid advertisements at the movies now. Remember that intense National Guard commercial from a couple of summers ago ? It felt like you were watching a movie trailer for the next G.I. Joe movie: the intense choir music, army men creeping out of murky waters wielding science fiction-esque guns. As opposed to the other seemingly endless commercials that play before a movie in theaters, this larger-than-life commercial grabbed your attention because you expected it to be a movie trailer. And you were probably more willing to sit through this advertisement to see what this entertaining movie trailer-like commercial was all about.

Surprisingly, this advertising approach shares some elements of “permission-based” marketing. It seems as if traditional outbound marketing efforts have been striving to be subtler in their ways, trying to gain more permission from their consumers to hear out their message. In many ways, it looks as though they're attempting to leave behind outdated methods and apply inbound marketing techniques that adapt to the modern day consumer's “no more interrupting my daily life please” perception of advertising.

Now the question becomes, are these methods still outbound ? The lines have certainly been a bit more blurred. Here are some other examples of outbound marketing adopting a more permissive approach...

1. “Rip Off the Band-Aid” Hulu Advertising: After a long day at work, all you want to do is curl up in your bed and watch a good old Hulu TV episode. It sure does beat frustrating TV commercial blocks! Even when you must watch commercials on Hulu, those commercial blocks try to be as painless as possible. For example, Hulu will oftentimes give you the choice of either being interrupted multiple times throughout your session, or it will offer you the “just get it over with” option where you sit through one elongated commercial at the very beginning of your session. Much like the National Guard commercial example I referenced earlier, these extended commercials tend to be very thematic and grand in scale. They have a large window for grabbing your attention, so they want to make it as entertaining as possible to pique your interest enough to encourage you to do further research into their product or service.

2. “Pick Your Poison” Hulu Advertising: Some advertising campaigns on Hulu will offer you three of its commercials to choose from. It is almost as if these companies think that by giving you a choice, you will actually develop a more favorable image of them since they aren't forcing one specific commercial onto you. To be honest, this advertisement is still standing in between you and your entertainment. In some ways, however, this technique has permission-based qualities. Although the advertisements only have slight variations from each other, you will still choose the one you relate to the most -- the one you think you will benefit most from. Because you consciously thought about how the advertisement might help you, you might even become more willing to sit through this company’s message.

3. Ad Campaign-Oriented Magazine Articles: Rolling Stone magazine wrote an article a couple of months ago called the " The 25 Boldest Career Moves in Rock History ." This article came out just around the same time as Jim Beam's "bold choices" advertisement campaign , and interestingly enough, Jim Beam banner advertisements were all over the article. Since the Jim Beam ad campaign was related to an entertaining article consumers willingly read, consumers would probably be more responsive to the Jim Bean advertisement. By aligning themselves with the same messages and themes as the ads, these articles gain the permission of the readers, who then make a positive association between the article and the adjoining advertisement campaign.

4. The “You Make the Commercial” Commercial: Interaction and engagement are pivotal for any successful advertising campaign. That's what makes user participation ad campaigns so unique and effective. By actively deciding the outcome of the ad campaign through voting, you as the consumer become more invested in the campaign because you have committed the time and energy to see what happens next. The voting-oriented “Mano-A-Mano in El Bano” Old Spice campaign , which pits the Old Spice man against Fabio in the most masculine popularity contest ever, has generated tremendous success through this very approach, with its YouTube videos accumulating millions of views and its social media pages buzzing with excitement and activity.

What do you think of these more permissive outbound marketing techniques? Are they effective?