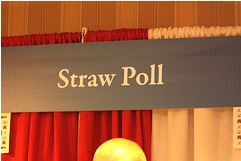 This past Saturday, the Ames Straw Poll was held in Iowa, which is the first test of the Republican candidates’ organizational strength in their quests to gain the Republican Party’s nomination for president. The event takes place each summer before the year of the presidential election. The winner of this year’s poll was Michele Bachmann, and many believe her internet marketing strategy , which focused on encouraging Iowa residents to attend the event to vote, was the key to her success.

In terms of marketing, many agree that the Ames Straw Poll showcases the organizational and marketing strengths of each candidate. What sets it apart from other contests along the road to the White House is that there is a stronger focus by the candidates on grassroots, targeted marketing efforts as opposed to traditional, wholesale media campaigns, primarily because there is an established audience upon which to focus. Only die hard, well-informed and passionate ‘politicos’ are interested in attending the Ames Straw Poll.

1. Make the event the focus of your marketing push. Bachmann set up a strong presence in Iowa with her digital team to generate buzz about the Ames Iowa Poll. Instead of focusing on a “Vote for Bachmann” message, the digital team focused its marketing on the candidate’s events associated with the poll. If you are new to industry in which you're marketing, promote your event in a way that positions exciting news or value relevant to your event, rather than focusing your marketing on what you're hoping to achieve with the event (in Bachmann's case, votes). If your goal is to get discovered, be creative with how you attract your audience. Once you gain a following and generate buzz around the event, you can market yourself later.

2. Use the larger event platform to generate leads. Many candidates used display ads on the [free] Ames Straw Poll website to grab the attention of undecided voters. Bachmann used strong call-to-action links on the site asking visitors if they wanted to take part in her entertainment events in Ames, which linked to landing pages with forms asking for support. When possible, always remember to take advantage of the larger event’s website reach and other ways to appeal to the majority of the audience. The larger event will most likely draw new and qualified leads for your business , so think of it as yet another qualified channel to generate more leads!

3. Make it easy, and get people to commit. One of the biggest challenges for candidates in the Ames Straw Poll is attendance. Candidates need to generate interest in the event, but they also need to ensure voters actually attend to cast their vote. Most candidates created online platforms for their voters to RSVP or register for a bus ride to the event. For your own events, consider using a platform like Eventbrite so people can RSVP and see who else is planning to attend. Creating a sense of a ‘team’ by allowing attendees to see that they're not alone generates excitement about you and the event. By creating multiple platforms for your attendees to actively commit, you can secure a more accurate count of the day's attendees. Think of enticing ways to generate multiple forms of commitment from attendees to be sure you'll attract a strong showing.

4. Use friendly competition and incentives to spread awareness and increase engagement. Prior to the poll, candidate Tim Pawlenty motivated supporters by creating a competition to take action through social media to spread awareness. He set up a Facebook Page that linked supporters and awarded points to supporters for completing specific tasks such as posting Facebook messages to promote his candidacy. Top performers were awarded prizes. The key takeaway here is to leverage your existing supporters or customers to spread the word to their own networks. Have loyal customers? Find ways in which you can get them to promote your event throughout their own networks. Make sure you motivate them appropriately, and thank and reward them for their efforts.

How to Build an Event Website That Drives Registrations