If you thought Facebook was going to sit back and just watch Google+ take over, you were greatly mistaken. Yesterday, Facebook announced two brand new updates, which enhance the News Feed by consolidating 'top stories' and 'most recent' stories into one single feed and introduces a completely new feature called Ticker.

Here's a quick look at Facebook's newest features, including the release of the updated Friends List functionality and the new Subscribe button that were introduced just last week.

As we mentioned, Facebook has released two new updates:

1. Changes to the News Feed: These changes combine the former two-tabbed News Feed (which displayed either 'Most Recent' updates or 'Top Stories,' depending on which the user selected) into one consolidated News Feed. The smarter feed now shows a user stories depending on how frequently that user visits Facebook, with the 'top stories' (marked with a blue corner) since a user's last visit shown at the top:

If you haven't logged into Facebook for a while, you'll see more 'top stories' featured at the top.

If you log in frequently, you'll see more 'recent stories' featured at the top.

In addition, photos are now more easily viewable within the News Feed now that Facebook has made them bigger and more prominent.

2. The Ticker: While the News Feed still claims to show you stories in real time, there's still a slight lag, and it's not exactly as "real time" as you'd think. The new Ticker solves this. Displayed in the top right corner of Facebook directly above the chat pane, like the chat pane, the Ticker follows you throughout Facebook, whether you're on your News Feed or another user's profile (or anywhere else for that matter).

Ticker shows you similar stories to what are presented in your News Feed, but it displays these updates instantly, enabling you to quickly identify, jump in, and comment on a story as the conversation is happening. Users can easily click on stories that pop up in their Ticker, view the full story, and comment, all without needing to navigate to a new Facebook page. Additionally, users with larger screens have the ability to adjust the Ticker to show more stories, pushing the chat pane down as a result, if desired. 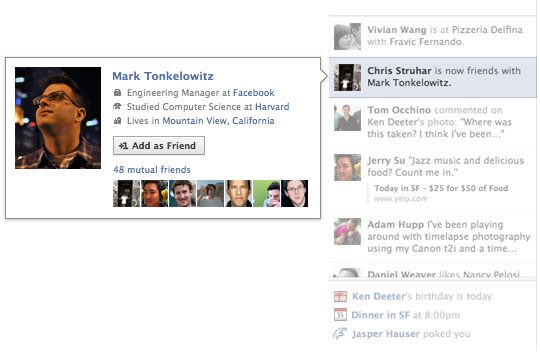 Over the few couple of months, we've seen Facebook and Google+ battling it out with the introduction of tons of new features in hopes of reigning supreme in the competition for social networking domination. While Google+ has been the first to roll out attractive new features, Facebook hasn't exactly been sitting idly by, fighting back with its own new features in order to compete.

All of these new changes Facebook and Google+ have been implementing mean a few important things for marketers: an emphasis on personalization, advantages in social search, and even more movement toward creating a truly real-time web.

So what specifically should marketers do? First, understand that personalization in marketing is becoming even more important. As a marketer, make sure your posts in social media are relevant and personal for your target audience. Second, because public search is becoming more and more possible in social networks, be sure that every post you publish is both optimized with your target keywords and is made publicly available. This will increase the chances your content will get found in social search and reach a broader audience, surpassing just your direct network of fans.

What do you think of Facebook's new updates? How else does it impact Facebook marketing?

How to Unblock Someone on Facebook and Messenger [FAQ]

Brain Typing & Skin Hearing: Everything You Need to Know About Facebook's 2017 F8 Conference

Everything You Need to Know about the Facebook Newsfeed