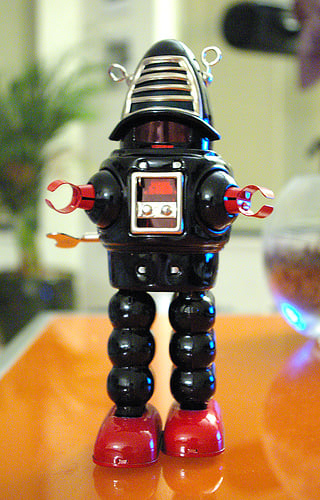 This is a guest article written by Stefan Tornquist, research director at Econsultancy and experienced entrepreneur, new media researcher, and business manager. He's built a reputation as a thought leader in online marketing as well as essential business issues, such as how to approach marketing and branding in an economic downturn.

Every few years, academia revisits the idea that robots are out for our jobs, and popular culture isn’t far behind. Rifkin’s famous book, The End of Work suggested that mechanization was approaching the point where the new opportunities it created couldn’t replace the ones it made obsolete. More recently, a Slate article raised this specter, this time focusing on the capability of robots (okay, mostly computers, but “robot” is way more fun) to replace jobs that require high level thinking and even creativity, and asking the question of whether human doctors and lawyers are becoming an anachronism.

The topic of robots and their capabilities is something I’ve been thinking about, because much of the research we’ve been conducting recently focuses on the role of technology in marketing and marketing departments. What is technology good for and where does it stumble? What’s common to those organizations that live in happy coexistence with their marketing technology? How do nebulous but important ideas like the “social brand” clash or jive with an increasing reliance on data?

Those are a few of the questions we’ll be tackling at during the marketing and sales conference Funnel in about a month, but for now, let’s look at where our robots can excel, but only with the help of their humans. AKA: marketing automation.

The pressure to automate pervades every industry, and the reasons are obvious to any stressed out, overworked B2B marketer. The sales cycle has elongated, making it harder to keep track of a lead that may become active months before a budget exists. Product research has become largely self-driven, relying on digital sources and peers instead of sales reps. At the same time, the number of people involved in the purchase – the buying committee – has grown as every stakeholder from IT to finance weighs in. Finally, marketing teams and their budgets have been cut back in response to an economy that appears mired in a phase of painfully slow growth for the long term.

In short, marketers have to squeeze leads from a tight market, understand the disparate needs of the buying committee over a long period of time, and produce content that satisfies all of them.

It’s a tall order, and in some areas of marketing, attempts to systematize haven’t worked. Digital display marketers are still asking the question of whether the nuance of human behavior can be decoded by algorithms with any significant benefit. But for organizations that depend on generating and understanding individual leads, automation can be very successful (if we play well with our robots).

We spent a lot of time talking with marketing automation users and vendors, looking for the commonalities of successful programs (and unsuccessful ones). Here are some of the top contenders.

1. You can’t automate a process you don’t understand. Great automation programs have to be built on a common language and process for lead definition and handling. Unless every part of sales, marketing, and finance contributes to this understanding and agrees to the process, automation is unlikely to soar.

2. Robots work on ones and zeros. Cleaning and consolidating data and databases is a prerequisite for efficient and powerful automation. Names have to share common data and definitions so they can be segmented by everything from stage in the cycle to title to region.

3. Humans need to cooperate with other humans. It’s very rare that you hear “we’re ready to do so much more, but the technology is holding us back” in any part of digital marketing. Well, you hear it occasionally, but it’s rarely true. Feature sets generally far outpace the bulk of the market. In fact, it’s the availability of human resources that’s most often in question. Those organizations that try to shoehorn marketing automation into the department’s existing responsibilities without providing new and specific staff are the most likely to find themselves using an advanced tool for basic email blasts -- and paying a lot to do it.

4. Perhaps most importantly, successful marketing automation requires creativity. The point of automation isn’t to stifle the marketer and reduce everything to its lowest mathematical denominator. At its best, automation frees the marketer from the grind of campaign duplication and manual sorting while creating opportunities for creativity that didn’t exist previously with easy access to sophisticated segments and subtle, meaningful timing.

The promise of automation is especially bright for those that focus on an inbound model, because the core of successful automation is content – the same compelling, relevant content that is the magnet for a successful inbound program. Perfectly timing a triggered email is only going to matter if there’s remarkable content to make it sing.

Based in Europe?  Come learn more at the Funnel event on November 1 in London.  Tweet @kirstenpetra by October 25 for a special discount code!

B2C Marketing Automation and 5 Top Software Tools to Power It