News related to Google+ has been slow in recent months. Hopefully, Google is working on business profiles for its social networking platform. However, today we got some exciting news. Not as exciting as business profiles, but close. According to Google, to date, 1 billion posts have been shared on Google+. 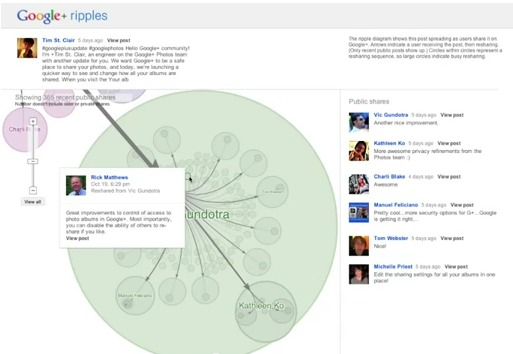 Google+ has also launched three new features. The first is a new tool called Ripples that visualizes how messages are being shared on Google+. The second, What’s Hot, helps users discover interesting and popular posts. Finally, Google+ has added Creative Kit, which introduces basic photo-editing functionality into Google+. Additionally, Google today announced that customers of Google Apps can now use their Google Apps username and password to sign up for Google+.

With Ripples, Google has added a visual layer of explanation around social sharing analytics. Ripples enables inbound marketers to see how their content is shared and which influencers help drive the most sharing activity. Trying to explain it doesn't do it justice. You need to watch the video below to really understand Ripples in action.

Parody is rampant in the social networking industry. Twitter and Facebook have long helped users discover popular or trending topics in addition to most recent posts. The new 'What's Hot' section on Google+ will appear after your regular updates section and use a special Google algorithm to rank popular stories. For a full explanation, check out the following video:

With Creative Kit, Google for the first time provides the opportunity for users to edit images in Google+. This makes Google+ much more similar to popular photo sharing service, Instagram. To view Creative Kit in action, check out this video from Google:

Many companies and individuals use Google's Apps product for a hosted version of popular Google apps like Gmail and Google Documents. As of today, Apps users can now sign up for Google+ using their Apps account. According to TechCrunch, Apps users will be able to share posts directly to other users within their organizations. Google is also building a migration tool, allowing existing Google+ users to port their personal accounts over to their Apps accounts. It isn’t done just yet, but Google says it will be in a few weeks.

These new features are cool, but they aren't exactly original. Marketers still need business profiles more than any of the new features Google announced today. However, take advantage of what Google provides. Ripples are clearly the most interesting feature for marketers. Understanding how your content is shared and who the top influencers are that cause the spread of your content is valuable. Look at Ripples for some of your content and gather data to improve your content creation and promotion efforts.

How do you feel about these updates to Google+?