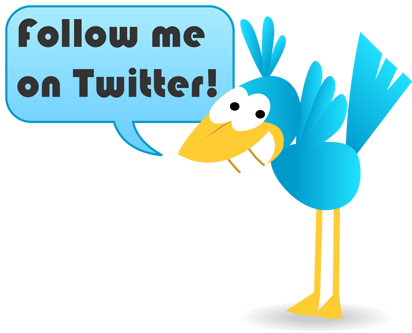 These results are extreme and beg the question, why don't people find value in tweets? Luckily, the study broke down some of the reasons tweets just aren't striking peoples' fancies. Let's dive into what causes people to dislike tweets, and what marketers can do to be better at providing the kind of content that people want to read on Twitter.

The Tweets People Hate, and Why

Before we get into some of the most offensive types of tweets, let's take a look at how survey respondents rated all the tweet types they were asked about. 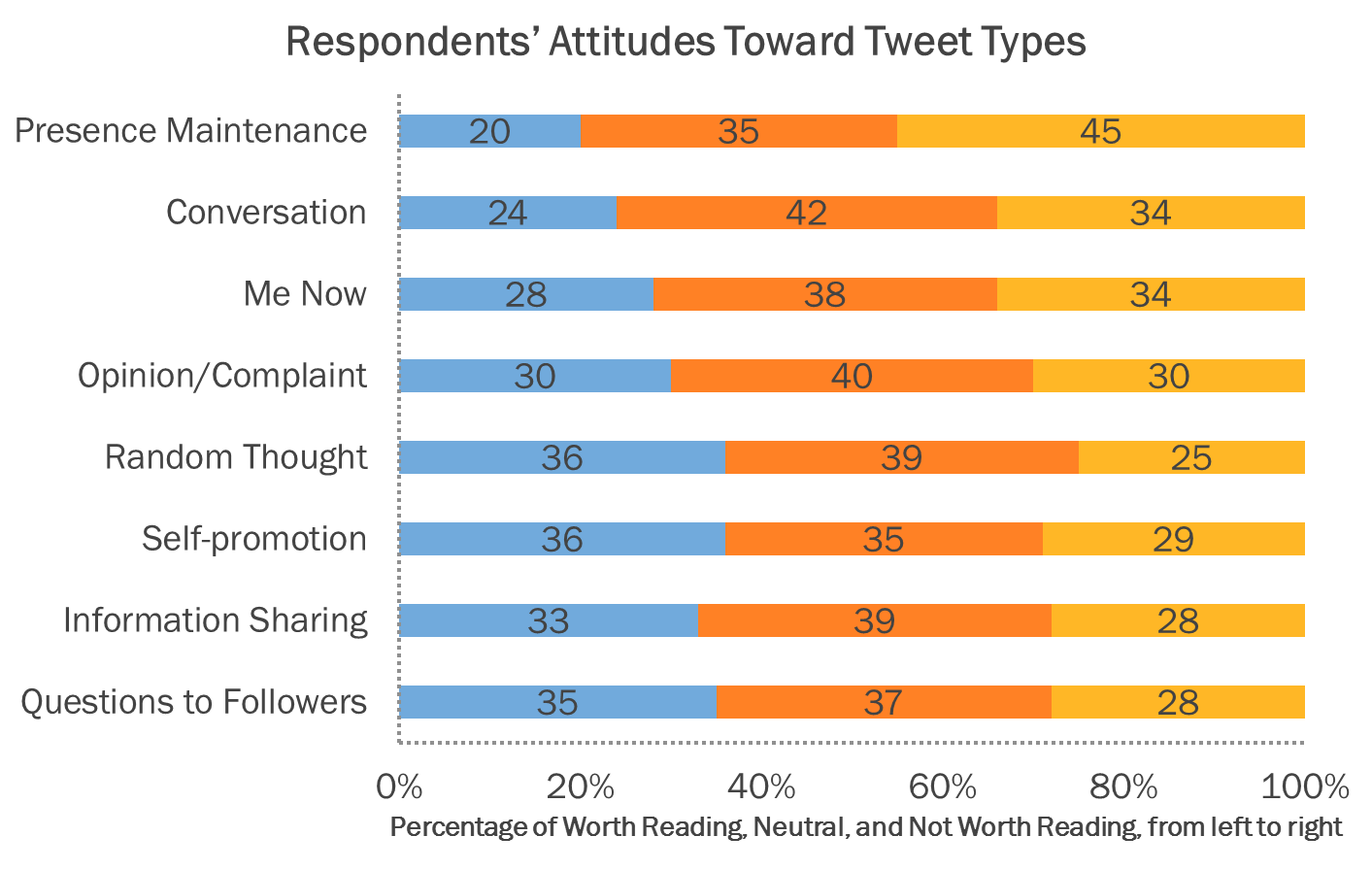 Some of those probably seem pretty familiar if you're an avid Twitter user. Let's dive into three of the tweet types these respondents found most offensive, but with one caveat -- we're not asserting this content should be totally eliminated from Twitter. It should simply be used with extreme moderation (that's an oxymoron if I ever heard one). It's okay to occasionally post about these topics, but if your tweets are too heavy with this type of content, you will be seen as less relevant and credible to your Twitter followers.

Tweeting a long-winded personal conversation back and forth will make readers less likely to value your tweets. Yes, it is important to engage with other Twitter followers, but if all of your tweets focus on this, other readers will not feel connected to your tweets because the conversation isn't relevant to the majority of them. Take a look at this sample Twitter conversation, for example.

Hi @PersonB! What are you doing tonight?

@PersonB Same. Do you want to go to a movie after?

@PersonA Definitely! What do you want to see?

@PersonB Whatever, as long as it's not too late a show. Have to get up early.

@PersonA Really? What do you have to do in the morning? What about a horror flick?

And on, and on, and on. If your conversation is that long winded, take it to direct message so you're not clogging up peoples' Twitter streams. Use your public tweets for something more valuable to the general audience.

Updates About Your Mood

Many people use Twitter as a way to complain about something that has gone wrong. Maybe they woke up with a headache. Or had a bad day at work. Or just want the weekend to come. Either way, it is not something tweeters reported enjoying reading on Twitter. Twitter is about spreading interesting content and engaging with others in a meaningful way, not complaining about things that have gone wrong for you, personally. Consider the difference between these two tweets, for example.

Such a long day at work, ugh.

The second tweet lets you comment on your mood, yes, but also provides information that people might care about. Now your readers understand that your day was so long because of inefficient marketing automation, and there's a solution that may help you solve that problem -- and could also help other followers with a similar problem fix it.

As location-based marketing grows, so do the check-ins that are posted on Twitter. Though some of the mobile check-ins can be interesting, tweeters reported that usually they find it to be overkill. For example, posting to Twitter that you went to breakfast, the gym, your house, work, a restaurant for lunch, back to work, out to dinner, out for a drink, and home overwhelms and annoys your followers. Occasional public check-ins provide value if they're accompanied with information followers can benefit from -- like sharing information about a sale going on at a local restaurant, or tweeting something insightful from the keynote speaker at an event.

7 Things You Should be Tweeting

Now that you know what not to tweet about, take heart in knowing there are a lot of valuable topics that you should tweet about. Consider these tweet formats to provide valuable content to your followers.

No obligation, no risk, totally free inbound marketing assessment of your marketing system from @HubSpot - ow.ly/9uInJ

Talking about content -- whether your own, or others' -- in your tweets is key to starting conversations and gaining new followers. Twitter is one of the best tools to share content and hear other opinions about it. Including lines from a blog post or your opinion on what you read along with a truncated link to that content is a great way to provide value. This is also how companies generate leads on Twitter -- by sending leads to a landing page on their own website to download content assets behind a form.

Questions to Your Followers

Part of interacting with people on Twitter is asking them questions and soliciting their feedback. Who doesn't want to give their two cents? Posing a question to your followers is a great way to start discussions and forge new business relationships. It can also give you valuable insight into your own business -- Twitter is an ideal social media network to gain real-time feedback from leads and customers. You can read more about how to use social medial for instant feedback in our blog post on the subject.

@tinybadass they took away the ability for you to add a call to action, form or coupon on your homepage

In addition to asking questions, you should also make sure to answer other peoples' questions, especially when they are directed at you. Answering questions directed at you is just good form -- you should be monitoring your social media accounts vigilantly, because people will use them as customer service mechanisms whether you like it or not. But answering questions that are just out in the ether is how you gain credibility as an industry thought leader. The more helpful you are, the more people will return to both your Twitter account and your other online real estate (like your blog and other social media accounts to which you've linked on your Twitter account, right?) to get answers to their questions. And that's how a mere Twitter follower turns into your brand evangelist and future customer.

Engaging with followers is important -- it shows your followers you care, and encourages others to join in on your conversation. But doing so intellectually can seem difficult in just 140 characters. Don't be scared to abbreviate, skip the formalities, and take conversations offline or to direct message to help fit more value into less characters. This is another instance where it's great to link to other content that helps answer questions in more detail. You can use your own content, or content from another site. When referencing other peoples' content, pull them in on the conversation on Twitter. It will strengthen your connection with them, too, when they see you're promoting them as a resource to your followers.

Download The 2012 State of Inbound Marketing hubspot.com/state-of-inbou… via @hubspot

Twitter is an excellent way to promote offers, events, coupons, and other lead and customer generating content. Social media followers expect brands to tout their offers, and it's one of the reasons they're following you -- to get the insider's deal. Your stream shouldn't be all coupons and freebies, but you should regularly pepper these offers in to help your own bottom line, and reward Twitter followers for remaining engaged with your content.

Facebook's new "Reach Generator" guarantees that 75% of your fans will see your brand's content each month! - ow.ly/9uIdq

Twitter loves data. Twitter loves infographics. Twitter loves research. Sharing content of this nature is extremely valuable for your followers, because exposing this information makes it really easy for them to look smart to their networks. What's easier than a RT with a piece of compelling data or original research? And if the data includes research about social media, it proves to be even more valuable on Twitter. The example above is especially effective to Twitter users as it shows how to get more clicks -- and possibly more followers -- on Twitter.

Absolutely! And from people outside your company. MT @FernwoodResort: do follow up posts that answers ?? raised during event #inboundchat

Part of providing value on Twitter is building on other valuable tweets. Even though you only have 140 characters to work with, adding more valuable content to other peoples' tweets is beneficial to your followers and helps open yourself up to relationships with new people. You may have to modify the tweet to fit your addition into the character limit. In these instances, type 'MT', which stands for 'modified tweet', instead of 'RT'.