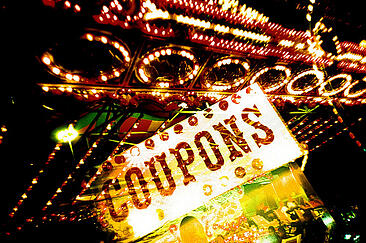 Last week, we wrote about some pretty cool news from Facebook -- it's testing coupons called 'Offers' for brick-and-mortar stores, helping local businesses better associate ROI with their Facebook marketing efforts. But we were left a little bummed, thinking that there were a few untapped markets with just this local, brick-and-mortar business focus.

Luckily, TechCrunch discovered that Facebook is also testing this coupon functionality with one more important segment ... ecommerce sites! That's right, it looks like ecommerce businesses will soon be able to feature coupons prominently within users' news feeds, in ads, and in Sponsored Stories that encourage users to click through and complete purchases in their web stores.

Frankly, ecommerce businesses seem like the most logical segment to leverage this new 'Offer' functionality, so it's a bit of a shock Facebook didn't begin their coupon testing with them. But, they're testing it now, so instead of pontificating about their rollout logic, let's just break down exactly what we do know about these Facebook ecommerce Offers.

First, let's start by clarifying that Facebook Offers for ecommerce is only in the test phase right now, so it's not available for all ecommerce businesses. Facebook is working with clients like Fox Shops, Walmart, and Lady Gaga's web store to test this new functionality, after which Facebook can roll this out to a self-serve interface similar to the brick-and-mortar Facebook Offers that became available last week. The timetable for a full-fledged launch, however, has not been announced. But when Macy's rolled out the very first Facebook Offer last month with a 25% off discount for purchases over $100, more than 41,000 claimed the coupon, according to Practical eCommerce.

When it does roll out, ecommerce companies and businesses with online stores will be able to create coupons that can be redeemed by customers online. You could either create a promotion code to use on your website, or simply use a link that lets you click through for a discount on purchases. These coupons can appear in the Facebook news feed, in ads, and in Sponsored Stories. They're totally free to run on their own, but you can also pay for ads and Sponsored Stories to have Facebook run your offer more frequently to increase visibility. But more on that later!

The offers are easy to set up; just like the brick-and-mortar offer setup, you simply click "Offer" from the space at the top of your Timeline where you typically go to share content, enter your offer headline -- in the Macy's example above, it was "Get 25% off your purchase of $100 or more. Save BIG on the latest trends!" -- set the expiration date for the promo, include any terms and conditions if necessary, and upload an image. Voila! You have your first ecommerce Facebook coupon!

To explain why this is so cool, let's take a look at a few examples from brands involved in the beta test. Last month, Kate Spade ran an offer for 25% off purchases online and in-store. This is a screenshot, courtesy of TechCrunch, that shows what a user receives on Facebook and in their email inbox after claiming the offer. 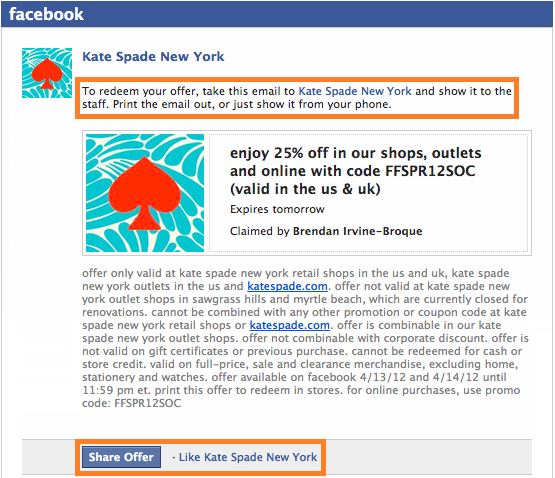 First, notice the instructions included in the copy at the top of the screenshot, called out in orange. That's right -- if you run both a brick-and-mortar location and a web store, you can leverage this functionality just the same! Just include instructions for how to redeem your offer in-person like Kate Spade did above, and be sure to train your employees on how the coupon can be redeemed -- by printing the coupon out from your email, or showing this confirmation from your mobile phone.

And if you don't have a physical location, your life is even easier; no staff training necessary! Just adjust your website to accept the new coupon code you've set up. You can either generate a unique code for each user so the offer is exclusive, or you can try to leverage your fans' reach, create a generic coupon code, and ask fans to share the offer so it spreads to all Facebook users. That's what you see at the bottom of the Kate Spade offer confirmation above, called out in orange -- they're leveraging reach instead of exclusivity with this particular coupon to get as many eyes on it as possible!

This new testing is exciting for one more reason -- it's also a lead generation mechanism! People who wanted to claim this Kate Spade offer could either provide their email address in order to receive the coupon above, or, if they were on their way to the Kate Spade site to make a purchase immediately, could click the URL that appeared in the offer to have the discount apply to their shopping cart. So while you don't have to make an email address a requirement when you run your own offers, if you're trying to grow your email list, Facebook Offers is giving you a new way to do it using social media.

How Much Does This All Cost?

Like I mentioned before, Facebook Offers for ecommerce doesn't have to cost anything. You can, however, pay to promote your offers so they get more visibility like Sears did below. 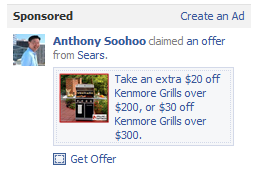 Sears paid to have its coupon appear in Sponsored Stories, so it shows up to the friends of Facebook users who claimed this offer. This could show up either on the Facebook side bar, or within users' news feeds. For either scenario, you can leverage Facebook's ad targeting to further refine who will see your coupon. (Tip: You don't have to use a coupon code to use Facebook Offers for ecommerce. Like Sears did here, you can simply create a link that offers a certain amount off a purchase.)

As Facebook's IPO approaches, the push to monetize is offering more options for businesses -- first brick-and-mortar, now ecommerce, next ... who knows? But when Facebook Offers for ecommerce rolls out to all, you can look forward to a better connection between your Facebook activities and actual dollars and cents. In other words, those fluffy social media metrics like engagement, reach, and shares will actually start to mean something to your brand's bottom line.

Do you think Facebook Offers is a good idea for ecommerce businesses?