How the Web Is Changing Video Marketing for the Better 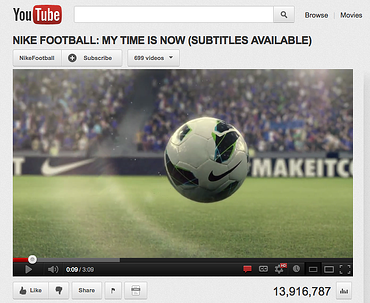 Make it short. This is advice you'll often hear from experts about producing online video for marketing. Making your videos brief will ensure that your content captures and keeps the short attention span of viewers. But, wait -- what if this short attention span is a myth?

Understandably, most would say, "It's not a myth." Video abandonment rates have traditionally been very high. In fact, a 2010 study by Visible Measures showed that 33% of viewers click away from a video after the first 30 seconds, and 44% will leave after the first 60 seconds. So you'd better keep your videos under a minute, right? Not necessarily.

Lately, we've started noticing some very high-quality online videos that seem to be successfully maintaining the attention of viewers for well over a minute. In fact, for more than three, five, and even ten minutes. This dynamic is primarily due to the content of the video, which isn't promotional and boring, but informative and/or entertaining.

Some of the online marketing videos we've started seeing today are more like short movies than interruptive ads, and that's a fundamental shift from traditional advertising. Up until now, the majority of the video ads out there (both on TV as well as on the web) revolve around a product or a service and are placed in between TV shows and movies. In this context, the TV shows and movies are the valuable content worth watching, and the ads are trying to steal minutes from your precious time to sell to you.

Now, we are seeing video ads that are the actual content and revolve around something bigger than a product or a service -- something a viewer would actually care about. This new generation of video marketing has swept us with its thought-provoking nature because it introduces content that, as AdWeek reporter Tim Nudd says, "makes you believe people don’t have short attention spans after all.”

Let’s look at some examples of how some companies have leveraged video storytelling for marketing:

Nike's recent cinematic video ad is designed to inspire youth to get deeply involved with soccer by learning about some key players and what it takes to be walking in their 'sneakers.' The video is like an interactive labyrinth of potential ‘tunnels’ the viewer can take to learn more about soccer. For instance, you can find out the name of a featured soccer player, along with their date of birth, an inspiring quote by them, and a chance to follow them on a social channel like Twitter. By clicking on some other elements in the video, like a player's watch or plastic water bottle, you can also learn more about Nike’s products or get insights into soccer-specific activities like workouts and games.

The ad aired on TV only after it debuted on Facebook, Twitter, YouTube, and Nikefootball.com. “Instead of making a big ad for TV then putting together a bolt-on interactive version, what we have done is make an interactive film and experience, then created an edit for TV,” says Graeme Douglas, W+K London head of interactive and innovation for Fast Company. “That’s a fundamental shift.”

This ad isn't about making a Nike sales pitch. It's about something much larger that Nike is simply proud to be part of.

Another great example of a long-form video ad that engages with its content is "The Infinite House" by German home improvement company HORNBACH. The 9-minute ad is about a new neighbor who transforms his little hut and brings joy and warmth to his neighbors. With its soft images and magical music, the video evokes a distant memory of some (maybe German) fairytale. Although none of the characters express their feelings, the video conveys a range of emotions from darkness and despair to lightness and hope.

The official video has more than 250K views on YouTube, but other users have republished it and contributed tens of thousands of other views. Aside from a subtle and brief product placement during the video, HORNBACH is mentioned only at the end of the ad. Yet, like the Nike ad discussed above, this is not a sales pitch but rather a story much larger and more infinite than the product.

For the launch of its channel in Belgium, TNT hired an agency to shoot a reality-TV type of ad. The agency got permission from a little town in Belgium to set up hidden cameras around a small red button with an arrow inviting people to press it. Once the button is pressed, a crew of actors rushes in and performs dramatic stunts.

A call-to-action appears at the end of the shoot announcing TNT as “Your Daily Dose of Drama.” In this way, everything comes together nicely and entertains both the community in this small Belgium town and the online YouTube community. The video, which has now accumulated more than 33 million views, got coverage from a number of sites, including the Huffington Post, Time and WebProNews.

The trend we're noticing here is pretty obvious: creating compelling video content that captures the audience's attention through storytelling rather than bombarding them with product-oriented messaging seems to make the attention span myth moot. People are willing to invest a few more minutes in watching your video content if it informs/entertains them and keeps their interest piqued.

What are some other online videos you couldn't stop watching? How have you incorporated more storytelling elements into your video marketing? Share your videos in the comments!