Stop Linking to Our Website or We'll Call Our Lawyers 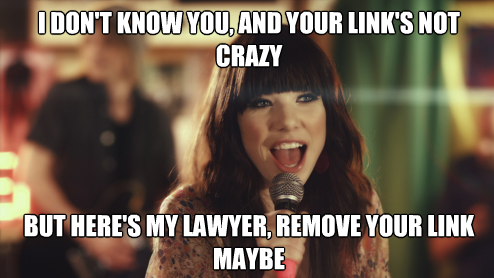 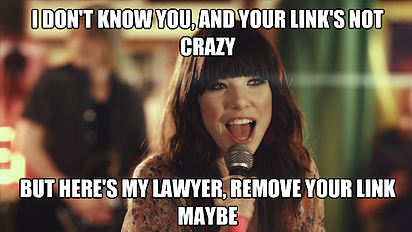 At least that's what we thought, until @AnneRuthmann (is it okay that we link to you?) tweeted a pretty bewildering story our way. In a nutshell, a lawyer who provides anti-piracy and intellectual property protection services contacted a webmaster and asked her to remove an outbound link from her website that linked to his client's site.

Confusion, amusement, and dismay are all appropriate responses. Let's dive into the story a little more to see what the heck happened.

Oh, and just to clarify the title of this post, we don't actually want you to stop linking to us ;-)

A lawyer at Guardlex contacted Christine at Big Pink Cookie on behalf of their client -- whose name Christine graciously removed in her blog post detailing this whole ordeal -- asking her to please remove a link from her site that led to their client's site. Since he works on behalf of the Anti-Piracy Department at Guardlex, which provides services that protect intellectual property, we presume the outbound link was classified as a piracy or intellectual property "problem."

According to the letter sent by the lawyer, the link from Christine's website resulted in "material financial loses [sic] to the company."

How on earth would an outbound link result in material financial losses to a company, you might ask? Well, we're going to get into some possibilities in the next section, but according to the letter, it was "due to search engine penalties resulting from the links originating under your control."

According to Christine, the link in question was from a blog post she wrote in 2001. That's eleven years ago. So in terms of inbound links, it's a pretty darn good link to get to your website. And the link was made even more valuable due to the fact that it was to an eyeglasses website, coming from a blog post in which Christine discussed the new eyeglasses she received. In other words, it was contextually relevant.

I mean, it could have been a little more relevant, like if Christine's entire website was dedicated 100% to eyeglasses. For example, let's say I link to a site about men's clothing in New York. That's a pretty good link, because it has relevant anchor text and the HubSpot domain has some authority in the SERPs -- we create lots of content and our domain isn't brand spankin' new. It's not the best link they could receive because our website isn't dedicated to talking about men's clothing in New York, but it still has some helpful qualities. The point of all of this is that links like the one going from Christine's site typically help your SEO, not hurt it.

But even though this link sounds high quality, are there ever any instances in which an inbound link is not good for a website? Could this have been one of them?

Saying an inbound link isn't good for a website is different than saying it's bad for a website. There are inbound links that don't provide value for a website -- those that are contextually irrelevant, from domains with low authority, or contain poor anchor text, for example. We've written about it in full in our blog post "Deconstructing the Qualities of High Quality Links" if you'd like to learn more. But those links don't actually hurt the website that's being linked to. In other words, just because someone doesn't provide great anchor text doesn't mean your website will get dinged by Google for it.

There is precedent, however, for sites being dinged due to excessive linking from a host of low quality sites. That's the whole precedent of the Panda updates from 2011! Sites like JCPenney that received hundreds of thousands of links from link farms were dinged in the SERPs when the first Panda updates rolled out. But that's a much different scenario than Christine's -- her site is far from a link farm, and contains high quality content that I'd certainly want some link juice from.

So when else could an inbound link cause damage to your business? Well, I supposed some damage could come if your business was positioned in a negative light on someone else's website -- but wouldn't that fall under ... slander? I don't know, I didn't go to law school, but it sure as sugar doesn't fall under intellectual property and piracy. And the lawyer's letter states the material financial losses sustained by his client were due to "search engine penalties resulting from the links originating under your control." So it wasn't that her link caused potential customers to stop visiting the website in question ... it was that the link allegedly caused penalties in the SERPs.

Learning From This Story

Like Christine and her hosting company note, it's her call whether she removes the link to their website -- which she did. In fact, the hosting company responded to the lawyer with a bit of an exasperated (and hilarious) tone, saying "We've had this discussion with you before: there is no infringement of anything in merely linking to one site from another -- case law exists on this. We absolutely will not instruct our users to remove links that violate no statute or our terms of service. Whether they choose to do it on their own is entirely up to them."

So apparently this company is making money off of the notion that inbound links can cause damage to websites. That's a pretty big bummer, because it means there are tons of businesses out there losing their money to lawyers fighting a fight that doesn't need to be fought. I'm not saying Guardlex is doing this maliciously -- and I'm not saying they aren't, either. I will say that they offer copyright infringement protection plans on their website, if that sways your decision either way. But this could all be a symptom of a bunch of people not realizing that inbound links aren't a violation of intellectual property; they're internet currency that almost always make you more successful, not to mention common courtesy when you're citing someone else's content.

The internet has been around for a while, but it's still new in the grand scheme of things, so we're all still learning "the rules." And by learning the rules, I mean making them up as we go. And slowly but surely, our legal system is also catching up to those rules we're putting in place as we all figure out the right way to work with one another on the internet. So while this could all be a huge misunderstanding fueled by lack of knowledge of how internet linking works, we can take it as a cue that not everyone "gets" it yet. And for goodness sake, don't throw your money out the window because a so-called expert tells you to do something; there's a chance they're not much more in-the-know that you are ... they might just seem like it.

Have you ever asked someone to stop linking to your website? If so, why?

How Hunter Got 100+ Mentions in 3 Months With Cold Outreach

12 Bad Link Building Practices & What to Do Instead