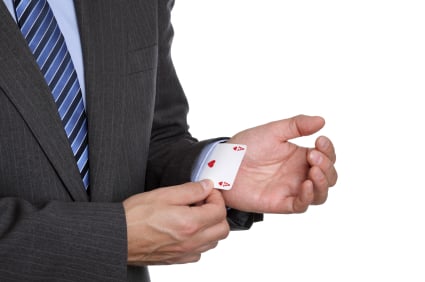 That means it's had more than its fair share of time to accumulate plenty of misconceptions and myths about how it works. But the times, they are a' changin', guys.

Some of these myths make sense -- perhaps they were once grounded in reality, but over time best practices have changed, yet the myths persisted. The other myths? They're just a bunch of hulabaloo! But they're the kind of misconceptions that, if marketers believe them, can really impact the effectiveness of email marketing campaigns. And nobody wants that.

So, this blog post will cover all of the common myths and misconceptions that plague the email marketing world, and debunk them once and for all. And of course, if you have any myths of your own you'd like debunked, submit them in the comments -- perhaps we'll even need a part two to this post!

1) Trigger Words Land You in the Spam Filter

There are a ton of words that email marketers have been trained to avoid like the plague in their email messages -- particularly the subject line. Words like "Free," "Cash," "Quote," and "Save." These warnings come from the days when email inboxes were inundated by crap messages from email spammers. While the days of email spammers certainly aren't over, spam filters have gotten far more sophisticated at identifying what kinds of messages -- and more importantly, what kinds of email senders -- are legitimate. Spam filters look at way, way, way more than just your email subject line to determine if your message is spam.

In fact, we conducted a test of our own to see if the word "Free" affected deliverability of our email message. The verdict? The inclusion of the word "Free" raised a red flag, but did not actually end up impacting the deliverability of the email message. That makes total sense -- because it's just one very minor indication that you may (or may not) be a spammer. Nowadays, if you're a legitimate email sender with a great sender reputation, telling someone you have a free ebook for them in your email subject line isn't going to shoot you into someone's spam folder.

You generate all of your email contacts through legitimate opt-ins. Good for you! That means people raised their hand and said, "Hey! You! I want you to email me!"

That's true ... ish. Not everyone that opts in to your emails actually wants to receive your emails. Two scenarios may occur after an opt-in:

In both of these scenarios, you have people on your opt-in list who, at one time or another, thought they wanted your content, but eventually decided they didn't ... and didn't tell you, either. That's why you can't rely on unsubscribes as the only way to tell if your email contacts want to hear from you; you should look at email engagement too. That's why it's important to periodically monitor email engagement, attempt to re-engage those who have become dis-engaged, and then cleanse your list of those who don't respond to your re-engagement campaign. We've written a blog post that walks you through that whole process in a way that will keep your sender reputation sterling -- read it here.

Unsubscribes are an indication that someone doesn't want to receive email from you. Bad, right?

Not so fast. When people unsubscribe from your emails, it acts as a natural list cleanser. Like we just covered, there are plenty of people on your list who don't really want to hear from you ... they're just not going to the trouble of opening your message and unsubscribing. If you have a healthy unsubscribe rate -- under 1% -- then don't think of unsubscribes as a bad thing. Think of it as natural list cleansing that every email marketer needs to do to keep a healthy list, so you don't end up with frustrated subscribers who huff and puff and, out of frustration, just mark you as spam (when you really aren't).

Email is a nurturing tool -- it helps to convert leads into marketing qualified leads, but it doesn't actually generate net new leads. Right?

Wrong. Thinking of email as just a nurturing tool is only half the story. First, remember that emails are heavily shared -- to people not already on your email list. That means if you have a lead generating call-to-action in your email, and that email is forwarded to or shared with someone who's not on your list, you have the opportunity to generate a brand new lead. So if you don't already have forward and social sharing buttons in your email messages, add them stat!

The second scenario in which email is a lead generator is kind of a mashup between lead generation and nurturing -- because you're nurturing subscribers (sometimes referred to as prospects, depending on your internal nomenclature) into leads. For instance, if someone subscribes to our blog, they're only subscribing to receive email notifications when we publish new blog posts. They're not signing up to receive, say, invites to our next webinar. But when you send an email alerting these subscribers to a new blog post being published, that email could include a lead generating call-to-action, too. All the sudden, email has helped you upgrade subscribers to a lead in your database!

5) Emails Have to Be Highly Designed

Not at all. In fact, sometimes it's better that your emails are really plain -- like, so plain that they're plain text, even. There are a couple potential benefits to sending plain text, or almost plain text emails:

Just because you have the ability to do some epic design work in your email marketing, doesn't mean you should. Err on the side of simplicity, and test out more sophisticated design elements incrementally to see if they impact your conversion rates.

6) If You Abide by CAN-SPAM Laws, You're Gravy

If you want to increase the likelihood that you get into inboxes, you have way more to work on -- namely your sender reputation. I'd recommend reviewing this post, "How Marketers Can Avoid Those Dreaded Email Spam Traps" as a start. And, of course, remain CAN-SPAM compliant!

The email open rate metric many ESPs display is very misleading, because the name implies that it will tell you how much of your list opened your email.

It does not do this.

Instead of looking at open rates to decide if your email send was successful, look at clickthrough rates on your email's calls-to-action, and the leads generated from that email send. That's what you care most about anyway, right?

I know, I said email open rate isn't an important metric. But it doesn't mean it doesn't have a use. Email open rates are still useful as a comparative metric. If you're trying to see what subject line people are more likely to open, for instance, you can segment your send and compare the open rates -- assuming they are each being affected relatively similarly by open rate metric "issues." So while open rate isn't a reliable email marketing metric to gauge how many people are opening your emails, it can still be used as an gauge when considered as a comparative metric.

What other email marketing myths and misconceptions are out there that you think should be debunked?