The Top 5 Super Bowl-Themed Marketing Stories of the Week 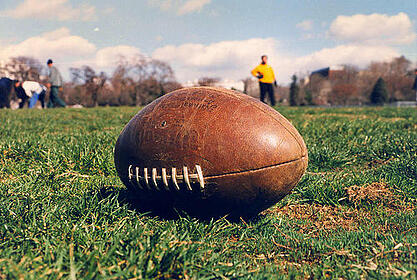 That's right, Super Bowl Sunday is here! For avid football fans, this means cozying up next to the TV with a big plate of buffalo wings, watching the Ravens and the 49ers battle it out in New Orleans. For inbound marketers, this means watching loads of 30-second commercials and wondering if all the advertisers' money was well spent.

Needless to say, this week's round-up is focused on Super Bowl-themed marketing. From historic ads in the 1980s to today's successful inbound marketing strategies like newsjacking and social media marketing, let's all enjoy a little Super Bowl marketing-related entertainment before the big game.

Ready to get started?

Super Bowl-themed marketing has certainly made a huge shift with the arrival of Twitter, Facebook, YouTube, and other, more cost-effective marketing tactics. Try to think back to a time before YouTube existed … interaction with Super Bowl ads used to be a water cooler conversation the next day, and if you missed the game, you missed the ads. This, of course, hurt general social interaction with other humans, and it also hurt the marketers who spent millions of dollars on TV advertisements that only aired one time ... for 30 seconds.

Once YouTube, Facebook, and Twitter came around, suddenly, the world of Super Bowl-themed marketing looked a whole lot more optimistic. Smaller brands could successfully play the newsjacking game and ride the trend wave without spending millions of dollars. Even bigger brands who consistently do spend millions on TV ads were figuring out ways to integrate social media and other web-based interactions into their commercials. Some of the first to do this were Doritos for getting fans involved on Facebook before the game with its “Crash the Super Bowl” campaign, and Audi’s incorporation of a Twitter hashtag within its TV commercial. Integrating these hard-to-measure TV commercials with an inbound marketing strategy initially helped brands actually track and quantify their success. Want to learn more about the history of social media marketing during the Super Bowl? Read the full story here.

Super Bowl Advertisers Can Expect a 20% Increase in Web Traffic; Mobile Video Viewing Will Double on Super Bowl Sunday, From the Adobe Blog

It’s obvious that traditional Super Bowl-themed marketing is changing and evolving as inbound marketing has become more effective and prominent. As Adobe puts it, “Simply tracking marketing budget ROI via focus groups and awareness studies is insufficient for today’s CMO.” Marketing today is all about delivering the right content, to the right people, at the right time and successfully measuring and analyzing your results to help you improve in the future.

In this study, the Adobe Digital Index team found that visits to companies that advertise on TV during the Super Bowl might see a 20% increase in visits on game day and maintain higher than average traffic the following week. Chances are, this is more based on the newsjacking effect and successful execution across all channels, rather than the TV advertisements alone. Additionally, online videos accessed by tablets and mobile phones reached 16% on a day with a major sporting event such as the Super Bowl, which is a 100% increase compared to a typical day in sports.

Based on this growth, it’s clear that websites should continue to invest in improving the quality of their mobile content. For advertisers, it challenges the effectiveness of those $3.8 million television advertisements and replaces them with options such as promoted online video, which is much more measurable and targeted. Want to see more stats from this study? Read the full story here.

Which brands and icons have you been hearing about the most today? Doritos? Budweiser? New Orleans? Beyonce? These are all relatively common trends for Super Bowl XLVII, but there are some seriously talented -- and unlikely -- companies out there that are also killing it in the newsjacking realm. That’s why we wrote this post, showcasing some of the brands that have absolutely nothing to do with football -- or typical Super Bowl traditions -- but are still managing to get noticed as key players on game day.

One brand that has consistently established its presence during the Super Bowl has been Animal Planet with its Puppy Bowl, providing an entertaining option for those who are less avid about the football game itself. Last year, 9 million people watched the Puppy Bowl, and 1.4 million people watched it by video stream. Similarly, advertising agency Mullen consistently hosts something they call the Brand Bowl. The attraction here is that they will rank the commercials and brands based on positive and negative ratings on Twitter to determine the best commercials of the Super Bowl. Even Chipotle is hopping on board with its Burritos by the Box campaign, in an attempt to change the way people think about Super Bowl party food. Curious to see what other unlikely brands have been doing to newsjack the Super Bowl? Read the full story here.

The 10 Worst Super Bowl Ads of All Time, From Mashable

Surely, we can all remember some of the more clever Super Bowl advertisements over the years, but unfortunately (for the brands producing them), we can also remember those that totally flopped. One example of this includes Apple’s “Lemmings” commercial in 1985. See below:

Apple went as far as creating a newspaper ad coinciding with the TV commercial in 1985, which essentially said, “If you go to the bathroom during the 4th quarter, you’ll be sorry.” The goal of this Super Bowl commercial was to capture the same level of attention that the successful '1984' Apple Macintosh Commercial did during the 3rd quarter of Super Bowl XVIII. The problem with this sequel ad was that it continued on with the 1984 ad's dark, mind-numbing theme of avid PC followers, but the audience never actually saw the light at the end of the tunnel. Generally speaking, Apple is quite the remarkable brand, but they certainly misfired on this one. Want to see more Super Bowl-themed marketing blunders? Read the full story here.

MarketingCharts reported that advertisers spent an average of $3.4 million for a single 30-second TV spot last year. And according to AdAge, the cost of Super Bowl commercials this year is even higher at an average of $3.7-$3.8 million.

What does this tell us? Well, besides the obvious “outbound marketing is expensive” argument, this suggests that Super Bowl advertisements are becoming just as popular as the game itself -- and this is a huge opportunity for inbound marketers. Three quarters of the top 20 most shared Super Bowl ads last year were launched online before the day of the Super Bowl, according to MarketingCharts. So next year, instead of spending millions on ineffective marketing, we suggest launching a Super Bowl-themed ad on YouTube and leverage this human tendency to share humorous videos during the game. Grab some ideas from the 8 unlikely brands mentioned above and newsjack your way into the living rooms of millions of Americans who are connecting and communicating about one common interest online. Curious to see more Super Bowl-themed marketing stats? Read the full story here.

What are your favorite Super Bowl-themed marketing examples? Share them in the comments below!