George Bell was CEO of  Excite@Home , CEO of  UPromise , and is now a partner at  General Catalyst,  a venture capital firm .

Device You Would Never Give Up ? 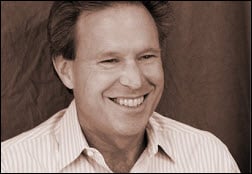 Blog You Read Most Frequently?

Social Media Tool You Actually Use?

Tricky ... speaker phone? I play with many for education but find I'm dedicated to none.

I produced and wrote adventure documentaries for ten years and have always found stories of exploration to be the most refreshingly instructive guide to start-up life, so I choose Undaunted Courage by Stephen Ambrose - an overview of Lewis and Clark's westward journey.

Person That Inspires You?

My wife. I know, I know...it's sappy, but she's incredibly alive and in the face of a numbing headwind of daily well, stuff, she always finds time to be creative

Who Was Your Best Manager? Why?

Francis Pandolfi, my boss at Times Mirror in the early 90s, he taught me how to listen in business and the value of common sense.

Production Assistant, ABC Sports, 1981, cleared $16k annually in NYC, felt so rich that the money was literally falling out of my pockets.

Where Do You Do Your Best Thinking?

By myself in the car on the highway listening to music.

What Do You Most Value in Employees/Colleagues?

Simultaneous ability to hold constant a state of paranoia and unbridled optimism - and humble, I believe in humble in business.

What I'd like to Be The World's Best at?

Recently, oddly, I've had the wish to become great at something only I would know about, in golf I suppose, but it would be my secret, like scoring a hole-in-one on an empty course, no one ever saw the feat, no camera ever recorded it, no reporter ever knew it.