Yesterday Forrester Research  reported  that 91% of B2B buyers are using a single class of business tools -- and often using them to research and execute purchases.

What type of tools are we talking about?

You heard right. Social media is no longer some fluffy domain for folks who can't read a spreadsheet. It's now one of the most widely used and cost-effective ways to reach new customers.

If you've been holding off on social media "until it becomes mainstream," your time is up. More than 90% of your customers are already using social media, and, as  Josh Bernoff   pointed out yesterday , you're late .

Here's a table that summarizes the Forrester report, published by  Laura Ramos  and  Oliver Young . 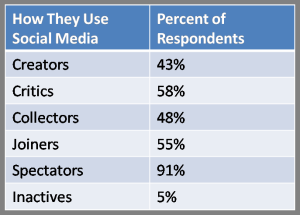 The left column lists B2B buyers' different uses of social media, while the right lists the percent of respondents who used social media in that way. The remarkable row here is the bottom one -- only 5% of B2B buyers are inactive on social media.