" @courtenaybird Glad you got home safe. I hope all was great during your stay! It was all our pleasure!" tweeted RSHotel to their recent guest, Courtenay Bird.

Bird is one of the Roger Smith Hotel 's 2,328 (as of today) Twitter followers. She is part of an online community that receives the hotel's good morning wishes along with updates about upcoming events and special deals. And she gladly responded to this social hospitability, " @RSHotel thanks!!! I had a great time and will definitely be staying at RSH again (and recommending it to others!)" 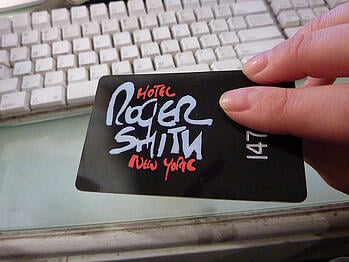 The Roger Smith, an independent New York City hotel with about 110 employees, uses social media to increase its brand awareness and provide great customer service. Here are six lessons you can learn from the Roger Smith's success:

1. Interact With People - Community conversations constitute a central part of any outreach campaign. Roger Smith has been successful interacting with people on Twitter . The social networking tool helps the hotel promote its events and offer special Twitter deals. As a result, the Roger Smith reaches a new audience and drives traffic to its website.

Adam Wallace ( @adwal ), the hotel's new media marketing manager, said in a telephone interview that he will soon be using Twitter to target people who have mentioned "beer" and "NYC" on Twitter. His goal? To invite beer enthusiasts to a brewery dinner . Wallace is planning the same marketing strategy for an upcoming wine-tasting event.

2. Tell Stories - "Keep it more about the stories," advised Wallace. The Roger Smith Hotel, for instance, maintains an entire website, Roger Smith Life , which revolves around sharing stories and engaging the community. "Do not see it as just advertising because it is not. It is an open communication," explained Wallace. It aims at offering transparency rather than, as Wallace put it, "blasting people with sales."

3. Show Real Faces - The hotel has had great success with their campaign showing the many faces of the Roger Smith community. In Wallace's words, by "putting a face to it" people understand the hotel environment and provide valuable feedback. Thus, small and independent businesses have the power to compete with bigger corporations.

4. Optimize Different Channels - Roger Smith Life is a hub for photos, articles, video materials, Twitter news and events. It features a photo gallery (as well as a Flickr photo stream), a YouTube channel and quirky articles about art exhibits, restaurant deals and, naturally, social media . In other words, it uses a range of content channels to offer a true taste of the hotel's culture.

You can follow this example by actively blogging, uploading video clips, tweeting and participating in Facebook discussions. You should also be " knocking down the old school walls of customer service " and allowing space for more efficient communication with past, current and potential customers.

5. Aim at User-Generated Content - User-generated content -- reviews, comments, tweets, podcasts -- greatly influences customer decisions. For example, Roger Smith Twitter follower, Rachael Depp ( @1indienation ) recently put together a podcast music mix honoring the hotel. In her mix she gave a shout-out to the chef at the hotel's restaurant . Her music message with Latin, jazz, reggae, and dance tunes can inspire anyone who wants to feel the hotel's vibe.

6. Be Curious - Don't be afraid to experiment. That's how the Roger Smith built its media presence. As Chris Brogan, another Roger Smith guest wrote , "If you could equip your customers to be excited, passionate carriers of your story, why wouldn't you try a few things and see what worked?"