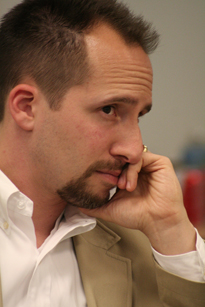 Todd Defren is a principal at SHIFT Communications, author of the blog PR-Squared, and co-founder of the Social Media Club. He has been a major player in the PR industry's transition into the PR 2.0 era and will be giving a live webinar tomorrow at 1PM ET as part of Inbound Marketing University.
1. As social media has evolved in the past five years, how has SHIFT adapted its PR strategy to the new applications and media outlets?
The entire industry has changed in the past five years.  Whereas the Social Media News Release felt like it was an innovation a few years ago, now it is just one of many tools and technologies.  I'd like to think we have gone further than most in trying to adapt our policies and practices.  It's a constant challenge to stay ahead of the curve.
2. What have been the biggest challenges with PR 2.0?
While the technologies have largely been free (for the most part), the level of noise has gotten exponentially louder and the number of people that we need to potentially reach out to has gotten exponentially larger.  The amount of work has gotten much larger. You used to have a list of the top 50 mainstream reporters and analysts for the industry your client was in.  Now you have to add to that 50 Facebook group administrators and the 5,000 people on Twitter who might be appropriate for any given client.  It's just as much about the edgework with end users as it is with those top 50 mainstream reporters.
3.  What is the best way to increase your visibility if you are a small business and do not already have an established brand on the internet?
Provide relevant content to the right people in the right channels and do it everyday, as often as possible.
4.  At HubSpot, we teach readers that creating remarkable content to market their products and services will draw people into their websites.  What are ways to reach different audiences with this content once it is out there?
It's not rocket science.  It takes not just the daily focus on content creation and promotion, but a daily focus on engagement in the right communities.  You can't look at this as a marketer who is all about broadcasting content.  You have got to look at it as a marketer who is all about adding value.  While some of that value is going to come from your own content, it can't exclusively come from your content or you'll be pretty quickly sussed out as somebody who is only in this for themselves.  The in it for yourself mentality may be what you think is going to help pay the mortgage this month, but it's not going to create long-term relationships that you can count on for longer term revenue potential.
5.  A lot of businesses struggle with the decision of charging for resources or giving them away for free.  You recently launched a new feature for Twitter, clickablenow, and decided to change from charging for it to giving it away for free. What factors influenced your decision to offer the application for free?  What did you learn from this and how has it performed since you made the change?
We had some internal debate over whether or not we should charge for clickablenow.  From the beginning, we agreed that we would listen to the community.  If we found feedback that free was the better way to go, we wouldn't be surprised by it and we would react quickly. There was a lot of enthusiasm for the idea but everyone balked at the 20 bucks.  We dropped the 20 bucks and the overall usage went way up.
6. Can you describe a PR campaign in social media that has done surprisingly well in the past year?  Why and how did it become so successful?
One of the things we are proud of at SHIFT was our work with H&R Block.  We worked with them for the 2009 tax season.  We were proud to help a big, established brand like H&R Block refine its approach to social media.  Whereas before they had gotten a lot of credit for experimenting across many different social media channels.  We did some hardcore research to find out which were the most appropriate and impactful social media channels.  We encouraged them to get out of SecondLife and, for the first time, to respond directly to users who are looking for free tax advice on Amazon.com and Yahoo! Answers.  This combination resulted in their tax-cut product becoming #1 in the market segment for tax-cut software over TurboTax for the first time, which was a big milestone for them.  It proved to us that a smart approach to social media that is relevant, responsive and diplomatic can absolutely help your business.
If you want to learn more about PR 2.0, register for Defren's live webinar tomorrow, Tuesday, August 11 at 1 PM ET.