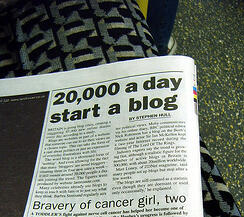 Don't start cutting off ties with journalists just yet.  Media relations is alive and kicking!


As a public relations professional, this week's top story on InboundMarketing.com really hit home for me.  In a time when we're constantly reminded of the pending death of newspapers due to the increasingly powerful Web, PR guru Todd Defren pulls us back down to earth to show us that, despite what you may think, media relations shouldn't be dying along with it.  In fact, among the pile of biased content littering the blogosphere, traditional news outlets still stand out as the most faithful, unbiased sources, proving that we should focus on media relations now more than ever before.

To support the thought that media relations shouldn't be at death's door, Todd points out that the number of unique visitors to newspaper websites has grown by 15.8% to 65 million in the past year.  While newspapers may be struggling in terms of earning money, their audience is flourishing.  Why?  Stories can now be spread much faster and more easily because of the Internet; in addition, with all the biased clutter found on the Web, it's no wonder that traditional news outlets are still seen as the most reliable editorial source.  Therefore, to get that coverage from credible media like the NY Times or BusinessWeek , Todd advises us to keep nurturing those media relationships!

Lesson: Apply traditional marketing tactics to the new ways of the Web.

2. Manifesto For The Content Curator: The Next Big Social Media Job Of The Future?

Speaking of the clutter on the Web, what if there were someone whose sole job responsibility was to sort through and uncover the best and most worthy content?  Rohit discusses this role and what it would entail, calling it "Content Curator," or someone who continually finds, groups, organizes and shares the best and most relevant content on a specific issue online.  Think Guy Kawasaki 's Alltop but on a much broader scale.

By some estimates, in just a few years we will reach a point where all the information on the Internet will double every 72 hours.  Does this role already exist in some places, and do we need it?

Lesson: You may have to sift through the clutter to find quality content.

3. How to Claim Your Website's Google Sidewiki

The Google Sidewiki is here, and Bill Hartzer gives you step by step instructions on how to claim yours and why it's an important thing to do.  The Sidewiki is an add-on to the Google toolbar that allows any Web user who downloads it to make comments on any website; the comments are then viewable to anyone else who visits the site and has downloaded the Sidewiki.

By claiming your Google Sidewiki space, website owners ensure their own comments appear at the top of all other comments.  Website owners can use this space to promote their site, direct visitors to important pages, and make sure they're aware of what others are saying about their site.  Although only users who download the wiki will see the comments, Bill suggests it as another way to join the conversation.

Lesson: Take advantage of new technologies, and don't get left out of the conversation (especially if it's happening on your own site).

Facebook just announced the release of its new tool for developers,  Translations for Facebook Connect , which can be used to translate websites into any of the languages Facebook supports.  Barb's short article describes the tool, based on the same solution Facebook itself employed to translate its site, which recruited volunteers to help translate the site into more than 65 languages.  The tool will display content in a visitor's native language if they log in using Facebook Connect.  This of course means that potentially all websites can be translated into Pirate language .  I'm a fan.

With its new $100 million funding under its belt, Twitter must justify its worth by leveraging the data it knows and translating it into real results and revenue for marketers.  Zephrin's article makes suggestions to Twitter about how to attract advertisers, primarily by capitalizing on lessons learned from email marketing.

Zephrin's thought is that email-like capabilities -- such as the ability to segment audiences, access dynamic reporting, test and optimize campaigns in real time, etc. -- would be valuable to Twitter advertisers.  If Twitter can deliver on these basic capabilities for marketers, they'll have no trouble pulling in advertisers' dollars.  What do you think?

Lesson: Successful techniques from one tool may work for another.