What Marketers Can Learn from Improv Stars 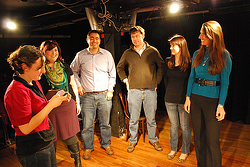 located in the North End of Boston, is widely known for their improvisational comedy and trust-fall-free corporate training. Eager to learn how techniques used at Improv Asylum could help strengthen our own marketing team, Hubspot joined Chet Harding, Improv Asylum co-founder and original cast member for a night of creative collaboration.

It may not seem that the same rules and techniques used on stage during an improvisational sketch comedy show could apply to your marketing team. However, improv instructors teach their actors how to be confident, natural content creators with good listening and collaboration skills -- qualities that just so happen to make an inbound marketing team successful.

Your Company’s Story Belongs to Everyone on Your Team

Improv groups use exercises that help develop skills useful on stage. As part of our corporate training, we took part in a similar word play exercise where we took turns building a cohesive story one word at a time. We found that for our story to grammatically make sense, we all had to contribute functional words (the, and, a, etc.) to keep the momentum going. However, from time to time, we were also called upon to contribute a place name (ex. mountains, park, Atlanta) or a verb that could change the direction of the story altogether.

As marketers, it's important that we all work together to perform the daily tasks which keep the momentum going, and also answer the call when offered the opportunity to have a more visible role. Remember, in the improv world there are no leading roles. Everyone on stage during a successful show can take credit for their contribution to the story or collection of stories they've presented to their audience.

An improv cast member can't keep saying no to a fellow cast member if they expect to move a story forward onstage. The same goes for the creative process. If your fellow coworkers come to you with an idea that is somewhat incomplete, try to say "Yes and..." instead of "no" and build off their idea.

Marketer 1: We should write a blog article about our experience at Improv Asylum!
Marketer 2: ....yes and it would be really helpful if it drew constructive comparisons between improv and marketing.
Marketer 1: ...yes and I can highlight 3 tricks that would help marketers work together more creatively.
Marketer 2: ....yes and you should include the portion about "Yes and..."  because I believe we could all learn how to build off of ideas more effectively.

When you think in "Yes and..." it's easier to strengthen your fellow marketer's ideas early on in the creative process. If you want to help your marketers brainstorm effectively, run them through an exercise where they each go around a table and share one idea in a few sentences. Then instruct everyone else on your team to try to build off that idea using the "Yes and..." exercise. After everyone has shared their idea, discuss which ideas people thought grew stronger throughout the brainstorming process. Remember, it's about quality of ideas, not quantity.

Listen, Don't Just Wait For Your Turn To Speak

If two actors were on stage during a scene and Actor 1 refers to Actor 2 as "Grandma," but Actor 2 starts playing his wife instead, the audience would probably be very confused. Listening is a huge part of what makes improv successful; actors will play games that test their ability to listen, respond quickly, and relate naturally to one another. At Improv Asylum, Chet lead us through a word association game. After completing this exercise, Chet pointed out that people tend to react to the word that came before the word they had to associate. For example, in our exercise, the flow went something like this:

As you've probably guessed, Person 3 wasn't associating Bus with his prompt word (Statue of Liberty), but with the previous word offered (New York City). Of course, Person 3 was most likely anticipating their turn to speak rather than deliberately ignoring their prompt, but at Improv Asylum, actors use this exercise to learn how to turn off anticipation and really listen to their fellow actors. Performing these exercises regularly can teach your marketers to live in the moment, tune in, and listen instead of just reacting.

If you'd like to see for yourself how Improv Asylum can help your marketing team work together more creatively, check out their free invitational corporate training session at their North End theater location on Thursday, November 12th from 4:30-6:30pm.