The campaign was not only a great example of the power of social media marketing but also evidence of the far-reaching effects of social media sites when used together. Take a look at how each contributed:

Facebook collaborated with (RED) , a brand created to raise awareness and money for the fight against AIDS in Africa, asking users to "turn Facebook (RED)" by changing their avatars to (RED) images, shopping for Product (RED) merchandise and becoming a fan of the (RED) Facebook page . (RED)'s CEO, Susan Smith Ellis, led the charge via a post on the Facebook blog .

Twitter also joined forces with (RED) and encouraged the Twitterati to include specific phrases (40 cents, World AIDS Day), hashtags (#red, #laceupsavelives) and usernames (@joinred) in their tweets, which would cause the tweets to turn red, spreading awareness to followers. Users were also able to change their account's theme to red. 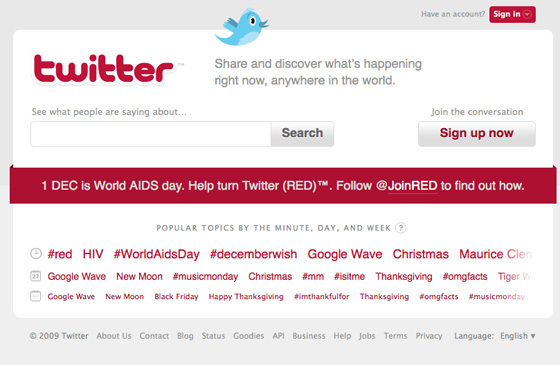 YouTube asked users to donate $5 and livestreamed an Alicia Keys concert in partnership with Keep a Child Alive , an organization dedicated to providing treatment, care and support for children affected by HIV/AIDS in Africa and India.  YouTube also promoted the video, The Lazarus Effect , about the power of AIDS medication.

Flickr partnered with AIDS.gov and used its blog to empower its users to spread AIDS awareness by printing a sign reading "Facing AIDS" and including it in a photograph and sharing it in the Facing AIDS Flickr group . 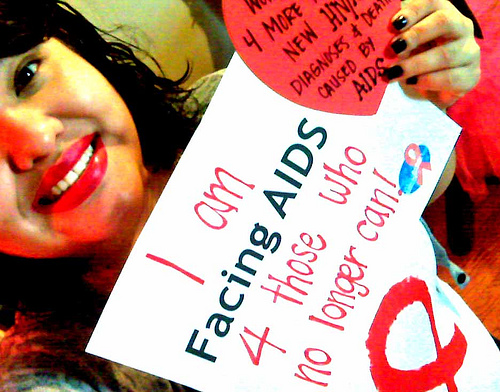 Google created a page devoted to World AIDS Day as a way for people learn about how they can contribute to the cause and support the 33 million people living with HIV/AIDS.

The Power of Social Media

(RED) CEO Susan Smith Ellis reported in her Facebook blog post that in only three years, over 1.5 million people have joined (RED) on various social media sites and over $140 million have been raised for the Global Fund .  Without the help of social media, she reflects, (RED) would never have been as successful.

So what lessons can you learn from the World AIDS Day social media campaign? Instead of limiting your efforts to one specific site, take advantage of the variety social media offers by spreading your message through multiple channels. Such a multi-faceted social media campaign that elicits the power of multiple sites enables increased visibility and the opportunity to reach a larger audience.