We all know that this year has been a tough year for everyone. In fact, it’s probably fair to say that if there is any increase in spending for the holiday season year over year than it should be declared a victory. According to comScore at this point in the holiday buying period there is a 3% overall increase over last year’s results. Of course, last year was a very rough one for retail so this increase is not a clarion call for the end of the recession.

One aspect of this holiday season though that is very evident is the further adoption of social media in marketers’ efforts to sell more product. It appears as if the reality is rapidly catching up to the hype with regard to social media. The following chart from comScore shows just how the influence of certain social media practices serve to influence buying habits this year. 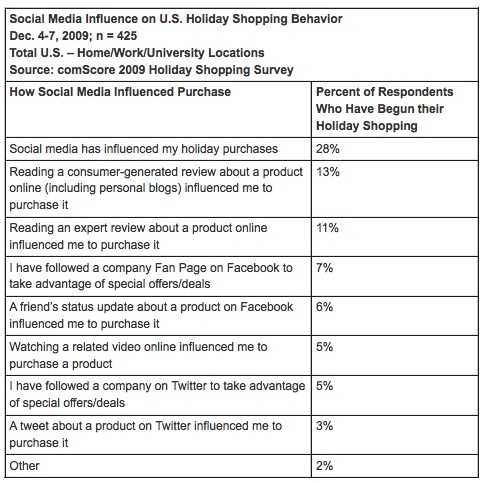 Gian Fulgoni, comScore’s Chairman has this to say about the results of their survey.

"Social media really appears to be emerging as an important marketing channel this holiday season,” added Mr. Fulgoni. “On the one hand, its emergence is being driven by increased consumer adoption of these technologies and the exponential growth in digital word-of-mouth that is occurring over this medium. On the other hand, having a social media marketing strategy makes sense for retailers in this environment because it’s cost-effective and shows an effort to get closer to one’s customers. I think we are getting our first real glimpse at the impact social media will play on commerce as we enter the next decade.”

We are likely seeing the dawning of the real use of social media in the process of marketing and selling. It is more important than ever to have these social media programs in place as a business. Are you ready for 2010?

8 TikTok Marketing Examples to Inspire Your Brand in 2022