A lot has changed with marketing since the dot-com bowl and even more since 1987 when soft-drink giant Pepsi first started their 23 year Super Bowl ad streak. For one, Michael J. Fox used to be featured in Pepsi ads.

By now you've probably heard all about what Pepsi is not spending their money on this year. Let's talk about where their money is going instead: The Pepsi Refresh Project.

Pepsi Experimenting with the Viral Power of Charitable Ideas

Edward Boches of Mullen recently composed a post about how crowdfunding is a growing trend among B2C businesses including sporting retail giant Land’s End. Similarly, Pepsi appears experimenting the power of the crowd. Except instead of taking donations from a large number of individuals, they're sourcing ideas . Using the Pepsi’s Refresh Project people can create communities which pitch ideas for charitable projects. People vote on the ideas and Pepsi makes those projects a reality. What Pepsi is most likely counting on is the reach of individuals to their networks. People push their “refresh” ideas to their networks through social media in order to generate more votes and in turn, more love for the Pepsi brand. 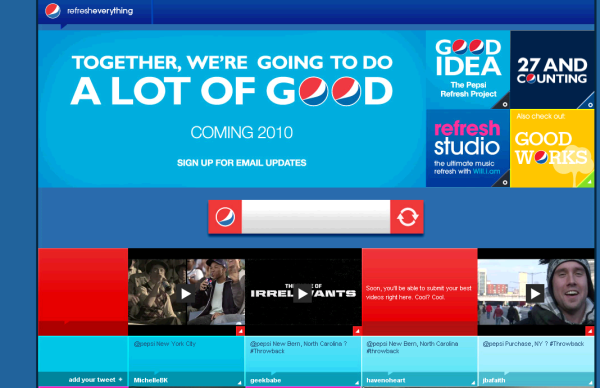 A quick look at the current Pepsi Refresh homepage reveals the outline of a community that will encourage Social Media participation including tweets, video, and photos from users. If RefreshEverything.com takes off, they may be well on their way to mastering the multifaceted social media approach in the future.

One thing is for certain though: It's an exciting time for marketers when a mega-company like Pepsi generates more buzz when they don't spend 3-million dollars on Superbowl ads than when they do.

Marketing in a Downturn Strategy Kit