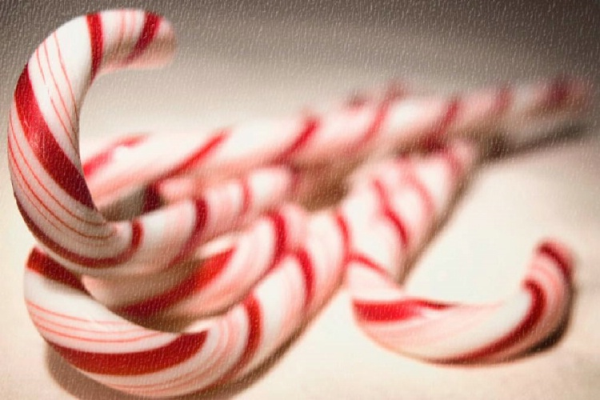 Two billion candy canes, about $214 million worth, were purchased this holiday season by consumers with a sweet tooth.   Here are some fun facts to help you celebrate the sugary day of December 26.

1. The original candy cane did not have stripes.  Before the red stripe was introduced, a candy cane was simply a white, mint-flavored stick.

2.  Decorating the tree with candy canes became fashionable during the 1850s when a resident of Ohio,  August Imgard, hung them on a Christmas tree to augment his homemade decorations.

3. Some Christians believe the candy cane has a symbolic meaning with the "J" shape representing Jesus's initial, and the red/white stripes representing Christ's purity and blood.  Others view the candy as the shape of a shepherd's hook.

4. The modern candy cane was invented by Bob McCormack of Atlanta.  He started the curved candy trend sometime in the early 1920's with handmade versions.  As the original candy cane maker in the United States, Bob's Candies manufactured about two million each day in 2009.

5. The mass-produced version of the candy cane made the scene in the 1950s when Bob's (see #3 above) brother-in-law figured out how to cut, pull, twist and package the confection in a factory setting.

6. Candy canes are made with sugar, corn syrup, and starch - a super-solid sugar rush.

7. Candy canes were once considered "medicine".  The soothing peppermint and sugar combo was used as a pacifier for children. Other flavors - including anise and cinnamon - were used by apothecaries to help soothe and calm their patients (probably the parents of the kids that needed a pacifier).

And, if on this day after Christmas, you are looking for ways to creatively use your leftover candy canes, here's a video to give you some helpful tips.

What type of "sweet" data points can you find in your business?