Despite Dominos' negative experience with social media earlier this year, which involved the explosion of a YouTube video showing two employees doing repulsive things with Dominos ingredients, the brand is now embracing the channel to promote its brand with its new Pizza Turnaround campaign . 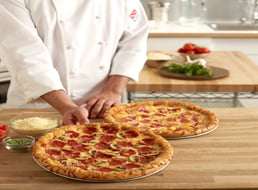 For a brand, one advantage of social media involvement is the opportunity to generate instant customer feedback.  Dominos' new strategy is a great example of a company using social media to listen to and react to its customers in order to solve a problem.

Let's take a look at what they're doing.

Dominos has had the same pizza recipe since they launched 50 years ago, and while it finished first in pizza delivery and value according to a 2009 Brand Keys survey of national restaurant chains, it also finished dead last in consumers' taste preference.  With pizza deliveries down 6% compared to last year according to USA Today , Dominos knew it needed to make a change.

To launch its "turnaround," Dominos has created a new website, www.pizzaturnaround.com , which features a new video documentary on YouTube (see above) that uses real Dominos employees to tell the story of how Dominos listened to its critics and is changing its pizza recipe for the better.  The site also includes a Twitter stream showing people's reactions to the new recipe (via the hashtag #newpizza ).

Dominos is encouraging consumers to try the new pizza and offer feedback via social media like Twitter, Facebook and YouTube.  Perhaps an even bolder approach, the brand is also reaching out to food bloggers who have previously made negative comments about the pizza's taste, asking them to publicly review the new recipe.

What Dominos is Doing Right

We can respect Dominos' campaign for a number of reasons.  For one thing, they're doing a great job of taking advantage of multiple social media channels (e.g. YouTube, Twitter, Facebook) to accomplish their goal.  Secondly, they're actually listening to what their customers are saying in order to improve their brand and their customers' experiences.  They're also being extremely transparent in their approach by asking their customers and critics to offer their feedback, whether positive or negative.

While it's too soon to tell if the company is benefiting financially from its new reinvention, Dominos' marketing approach is definitely admirable and unique.  In the very least, it's certainly generating some initial buzz and curiosity.

What do you think of Dominos' new campaign?  Has it tempted you to try the new recipe?

Take your brand to the next level with this free guide + templates.