Why Pampers' Diaper Fail is a Lesson in Marketing Transparency

Ad Age reports that Pampers new Dry Max diaper, "the most significant innovation in 25 years" for the company, has already gotten a bad rap due to negative reviews online at Diapers.com, PampersVilliage.com, and on other social media sites. The reason these negative reviews developed two months before Pampers Dry Max campaign launch has to do with the way Pampers rolled out their new product.  According to P&G, the new diapers have been available in various early markets starting last summer. Since distribution was slow and many of their prospects wouldn't have access to the diapers until much later, Pampers decided to place the new Dry Max product in the old "Cruisers" packaging. Here's the kicker: instead of explaining the change to their customers, Pampers decided not to say anything at all until the campaign launch (two months from now).

Meanwhile, word started spreading virally about the new product among moms complaining about the new design in old package's clothing. Since then a Facebook group calling Pampers to bring back the old "Cruisers" also surfaced and more and more people have joined in on the PampersVillage.com conversation. 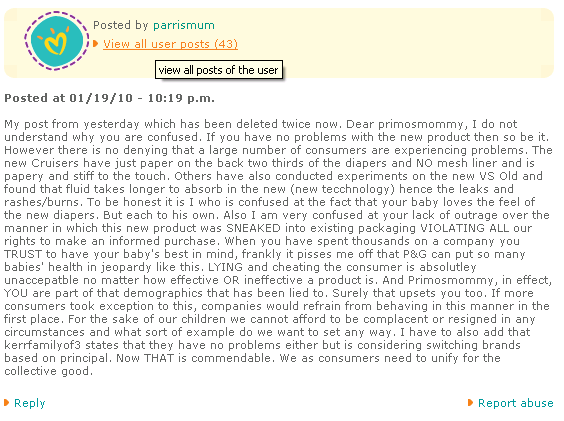 I wonder if this backlash against Pampers could have been prevented had they had as much transparency in their process as Domino’s Pizza did for their Pizza Turnaround Campaign. If you haven’t heard, Dominos recently updated their pizza recipe for the first time in 50 years of business. They made sure to document the entire process on their site www.pizzaturnaround.com, posted videos to YouTube and even invited customers to comment on the new recipe on Twitter via hashtag #newpizza.

This strategy is drastically different than Pampers, who has been slowly planning a large marketing campaign for Dry Max. For many customers (who have already used the product) this campaign comes way too late.

According to Jody Allen, V.P. of North American care, P&G believes that the negative feedback will quickly fade out once their marketing campaign goes in motion. Admittedly, P&G has been known for many years for their rigorous product testing. So, it's possible that these Dry Max dissenters represent a very small portion of Pampers' customer base. The question is, could much of the negative feedback been prevented if P&G had communicated as well as Dominos about their product changes?

Start the Conversation, Before it Starts About You

Many big businesses have had success in using social media to communicate in a more timely way with their customers. This week, FourSquare had an API issue with their service and I couldn’t update my status for a few hours, which was frustrating. However, the entire day they made sure to post updates to Twitter to keep me informed on their progress toward fixing the issue. Since they'd taken the time to build their presence before an issue occurred, I was able to check my Twitter feed to get answers that helped alleviate my frustration.

Pampers could have been using their Twitter and Facebook accounts to announce the change and to prepare their customers for the “new and improved” diapers. They could have documented reasons why the new diaper was chosen by interviewing their employees (as Dominos did) and posted them to YouTube and their Pampers Village forum. They could have done a lot of things to keep the lines of communication open and show that changes for the new Dry Max diapers were based on customer feedback and a clear customer need. It's obvious based on a quick glimpse at PampersVillage.com forums that P&G failed at communicating changes properly.

What other ways could Pampers have been more transparent about their new product launch and communicated more effectively? How do you use social media to communicate to your customers before a major marketing push?

Video: How to Use Social Media to Manage Your Company Brand Online