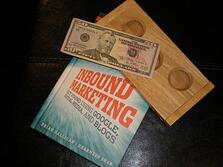 Have you ever felt that you'd unintentionally opened the marketing equivalent of Pandora's box and that, when opened, all the toils and trouble of Outbound Marketing were unleashed on you relentlessly?

Recently  Brian Halligan , CEO of HubSpot, received a promotional item in the mail, a puzzle box containing a $50.00 bill. A puzzle box, also called a secret or trick box, can only be opened through some obscure series of manipulations. The $50 was Brian's incentive to open it and claim the prize.

The initial interest was high and caught the team's attention. Brian and a group of his employees discussed different tactics. At this point, the promotional item (provided by an international training company we've chosen not to name) proved to be effective. The $50 incentive got people thinking about the box and spending a large amount of time trying to solve its mysteries.

Then the calls began.

The first call from the sender of the box was understandable. They wanted to know if we were successful in opening the puzzle box and also, if we were interested in their services. We told them thank you for the box, but that we did not need their services at the present time.

However, the incessant calling and other follow up messages did not stop. What began as a thought provoking experience, ended on a negative note. We now associate the puzzle box, at best, with bribery. "Have fun. Get the cash. Now, you owe us something."


In the original telling of Pandora's box, Pandora is given a jar as a gift from Zeus who instructs her to keep it closed or pay the consequences. Pandora, who was a curious woman, decides to open the jar. When she does, it unleashes the all the ills and disease on to the world. At the bottom of the jar, however, lay hope.

The theory behind Inbound Marketing is that processes such as cold calling are no longer effective; people are tired of being interrupted with traditional outbound marketing messages. At HubSpot, our hope is that we can change the way businesses market to their prospects and help them generate more leads through Inbound marketing methods .

Had the sender stopped after initial contact, the conversation may have lead to some type of professional relationship. Now all that's left is a negative connotation.

In the end, Brian decided that the only thing to do was send the puzzle box and $50.00 back along with a request that they stop calling.

Have you ever been on the recieving end of a Pandora's Box promotion? What would you have done?