Why I Would Hire Bode Miller as My Inbound Marketer 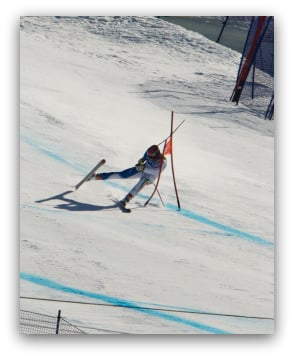 Bode Miller gets it. For all of his sometimes not-so subtle defiance, he is pure and honest in his approach to skiing and what it means to be a competitor. Four years ago Miller was on the receiving end of some pretty tough criticism when he failed to win a single medal in Turino. In fact, he failed to finish on a couple of occasions. He was chastised for his aloof and nonchalant attitude towards his perceived failure. The fact is, he didn't see it that way. Though I do believe Miller's attitude toward the Olympic Games has evolved, even transformed, since 2006, I don't believe his feelings about his performances have.

When Bode Miller comes out of the gate, he only knows one way to approach each race and that is to go all out -- to hold nothing back and just try to get from start to finish as fast as humanly possible. Sometimes this means nearing 80 miles per hour while navigating unfamiliar and uncertain terrain. Guess what, folks? When you take an approach like that every time you leave the gate, you are bound to make mistakes.

When the world is watching, on the surface, a major wipeout or even a simple DNF (Did Not Finish) looks like a failure to a lot of people. Not to Bode Miller. He understands the risk involved the way he skis and he chooses to take that risk and learn from any mistakes he makes along the way. His focus isn't on the medals; his focus is on the moment. "What can I do today that makes me a little better than I was yesterday?" Sometimes he strikes gold, sometimes he strikes snow and ice.

The bottom line is, we don't watch Bode Miller ski because of his Olympic medals or World Cup wins (I don't even know his World Cup record). We watch Bode Miller because we know we are going to see something special ...every time . Sometimes that results in a gold medal, sometimes it results in a wipeout. Either way, Miller has found a way to overcome the fear of what other people might think; instead, remaining confident that if he gives everything he has to give, his performance will be remarkable, if not inspiring.

Why Bode Miller is an Example for Inbound Marketers:

One of the cornerstones of inbound marketing , perhaps the cornerstone, is content creation. There are several ways to create content: pages on your website, blog articles, webinars, videos, PowerPoint presentations, photographs. It's all pretty low budget, yet most companies don't do a great job of it. Why not? When you publish something on the Internet, it's out there. People consume it and judge it. Your reputation is on the line. That can be pretty scary, and I believe that fear keeps some really smart people from sharing their thoughts.

Marketers can learn a lot from Bode Miller. Anyone who has been paying attention at all knows that the most successful people and companies online are those who aren't afraid to take a risk. Sometimes the risks are small; commenting on a blog post or even launching your own blog to share your thoughts, ideas and expertise. Other times they could be greater; your first attempt at video marketing or taking on a Goliath like Google or Microsoft.

No matter what, if you have the right approach, you can only win. If you crash and burn, you learn. If you execute flawlessly, you reap the shiny reward of more traffic, greater visibility and more customers for your business . There really is no secret. If you are honest in your approach to creating content it's going to work out in the end. There might be some bumps along the way, but the satisfaction of knowing you gave it a truly honest effort will be rewarding in and of itself.  Additionally, you will definitely gain a following. There is no reward without risk and there is definitely a market for authenticity.