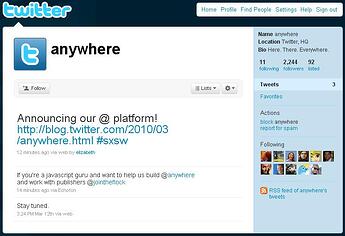 Evan Williams, CEO of Twitter , took the stage to a packed room at South By South West Interactive on Monday afternoon to break some major news about Twitter.

Since starting in late 2006, Twitter has emerged as a major leader amongst social media platforms .

The conversation started with an announcement from Willliams about Twitter's new feature called @Anywhere , which integrates Twitter into Web sites, allowing people to follow people and get Twitter data without actually visiting Twitter.com. This platform will launch on about 16 Web sites, including The Huffington Post and Digg .

Williams explains that @Anywhere should help people discover more interesting information and then help Web sites build more consistent traffic and engagement around their content. He says that the service is designed to make it easier for people to connect.

In discussing his leadership approach to Twitter , Williams says that he spends half of his time thinking about the product and the other half on focusing on organizational issues.  He also mentions that he tells new employees to remember that there are more smart people outside of the company than inside of it.

He aknowledged that sharing data with Google and Microsoft was a difficult discussion in the organization. Once people realized that, it helped better distribute the awareness of Twitter. Openness was a constant theme of many answers from Williams.

Twitter.com is a consumer interface, but CoTweet and Hootsuite built a business on Twitter creating a customer service interface. He also pointed out theirs is a hardware device that lets bakers automatically tweet when new cookies are coming out of the oven.

Live Webinar: The Science of ReTweets With Dan Zarrella