Ever wonder if you and another Twitter user were following any of the same people?  In the future, it looks like you'll need to wonder about it no longer, as Twitter is testing its new 'You both follow' feature on 10% of Twitter users. 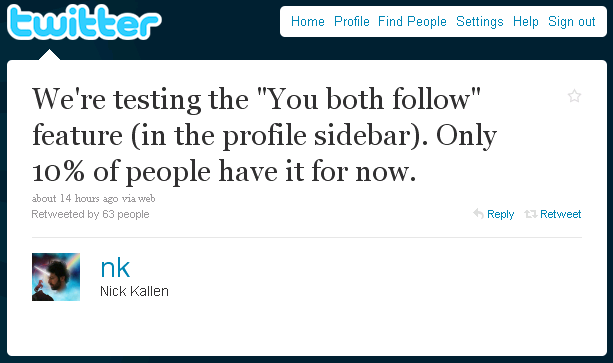 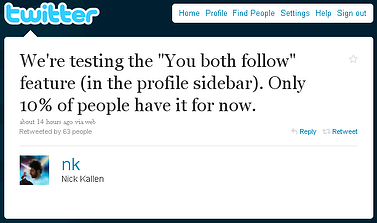 Once the feature is rolled out to all users, by clicking on a user's Twitter page you'll find a new addition to their profile sidebar just above the 'Following' section with the heading 'You both follow.'  This section will show you a snapshot of who you're both following.  Click the 'View All' link underneath, and you'll find a comprehensive list.  Think Facebook's 'Mutual Friends' feature, but on Twitter!

Twitter has given no indication when the new feature will be available to all users, but it seems like we've been seeing a lot of feature adoption between social networks lately.  For example: LinkedIn's new robust link sharing feature , which looks a lot like the pre-existing feature available on Facebook.

What's in It for Marketers?

Networking is a valuable way for marketers to find and connect with influencers and new prospects.  Twitter's new feature will be a step in the direction toward turning Twitter into a more interconnected social network, making it easier for marketers to recognize and ultimately take advantage of their social connections on Twitter.

The future availability of the 'You both follow' feature, as well as Twitter API Engineer Marcel Molina's announcement that a Twitter team has formed to "build rapid prototypes," means marketers should keep an eye out for increased functionality and new features that help them better take advantage of their social connections on Twitter.

On-Demand Webinar: The Science of ReTweets With Dan Zarrella