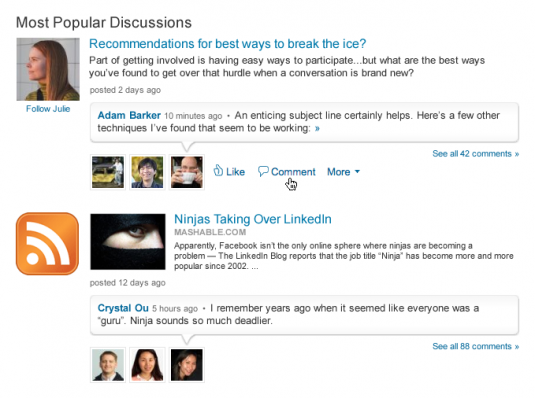 LinkedIn has often been criticized for not making improvements to its business social networks at the same pace as other networks like Facebook. Recently the company has been adding new features at a rapid rate. Earlier this week the social network announced that it now has more than 70 million users, and more than 1 million company profile pages . Today, Linkedin followed this growth announcement with some significant improvements to its Groups feature.


Taking LinkedIn Groups to the Next Level

A LinkedIn Group, for those not familiar is essentially a way to create a forum on a specific topic within LinkedIn with the ability to invite other members to participate. In less than a year 650,000 groups have been created on LinkedIn.

In the most recent improvement to groups released today, LinkedIn is leveraging some popular features from Twitter and Facebook.  In addition to making it easier to share links, group members can now “like” articles in a group as a way to show approval and share the article, similar to the “like” feature on Facebook. Similar to Facebook Fan pages users profile images will now be displayed next to a comment that they leave within a group.  Linkedin will show you which members of a group have liked an article to help provide additional context to the the topic and tone of the conversation. 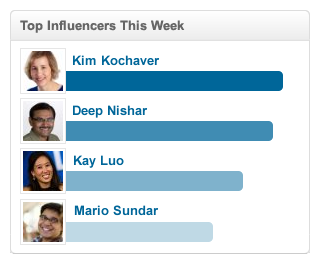 According to LinkedIn , “the new groups interface introduces an easy way to discover participants who truly drive the activity of the group’s discussions each week by highlighting them as “top influencers”.  This designation is given not only to those who contribute the most, but also to those whose contributions stimulate the most participation from other group members.”

I recommend taking a look at the video LinkedIn has created about the new Groups feature .

As a marketer LinkedIn Groups can be an important tool for social media lead generation. If you already manage a LinkedIn group, encourage group members to use these new features and consider rewarding the “top influencers in your group. If your business does not currently mange a LinkedIn Group research if groups exist that are related to your industry and then makes a decision to either participate there or start a group of your own.  Remember that if you are attempting to catch the eye of a particular prospect, one more way to grab their attention maybe to simply “like” something they have shared within a group.